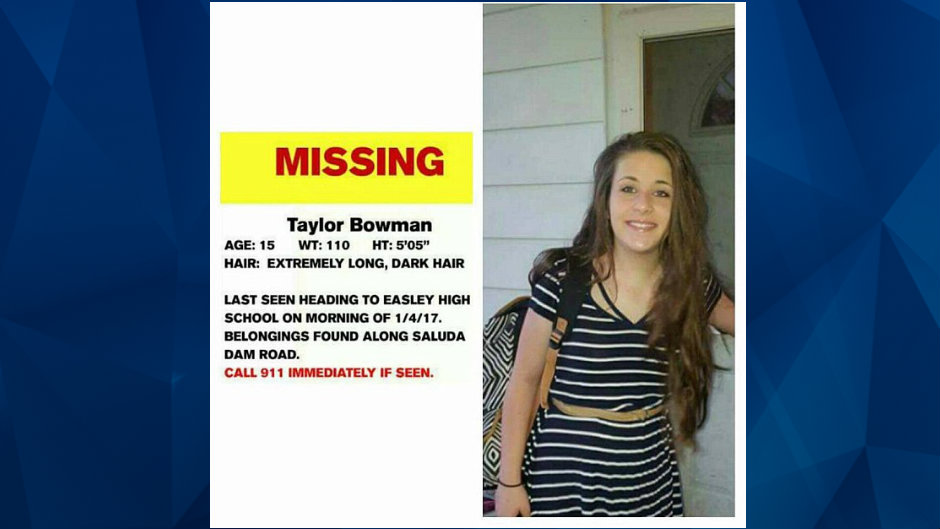 South Carolina authorities are searching for a 15-year-old who disappeared on Wednesday morning while walking to school in Greenville County.

FOX Carolina reports that Taylor never showed up for classes at Easley High School on Wednesday, prompting a search around the Saluda River. Authorities found Taylor’s backpack and a stuffed animal lying on the ground.

Helicopters hovered around the river while a dive team, deputies, and an emergency response team searched the river and its vicinity. After exhaustive efforts, they called off the search when no evidence was found.

UPDATE: We received clearer photos of Taylor Bowman, 15, who disappeared on the way to school. Please RT! #missing https://t.co/wuXBnRXWwR pic.twitter.com/lMXK31KIE7

As of now, according to Sheriff Will Lewis of the Greenville County Sheriff’s Office, foul play is not suspected. However, they’re following up on the numerous leads coming in, and plan to continue the search.

“We’ve invested all assets in this 15-year-old because it’s imperative she’s found,’ Lewis said, adding that the girl’s family has been cooperative.”

#GreenvilleCounty actively searching for missing 15yo #TaylorBowman. She vanished heading to school this morning on Saluda Dam Rd pic.twitter.com/Lius40cgrE

Easley High School district spokesman John Eby said that Taylor rides a school bus to school, but for reasons yet unknown, she walked to school on Wednesday.

If you any information regarding Taylor’s whereabouts, contact the Greenville County Sheriff’s Office at 864-271-5210 or call 911.