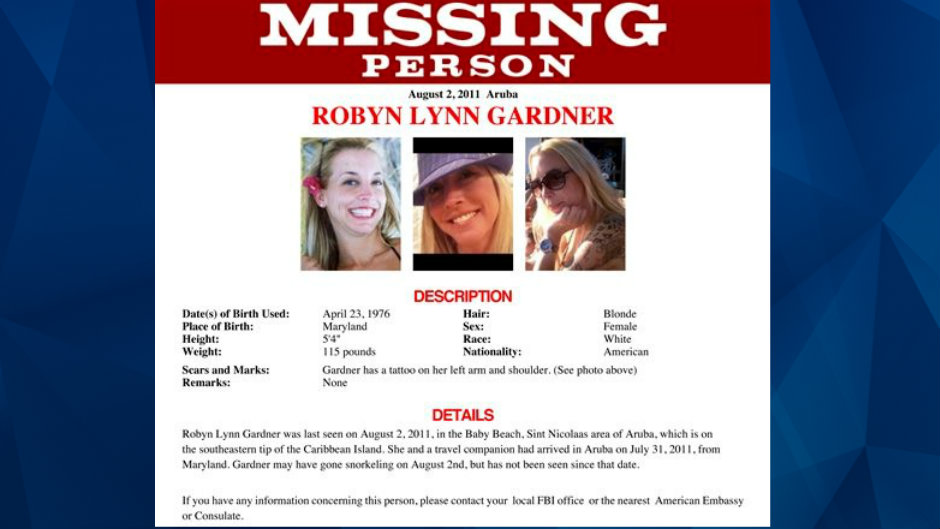 Robyn Gardner, a 35-year-old native of Bethesda, Maryland, was reported missing at about 6 p.m. on August 2, 2011, during a luxury snorkeling vacation in Aruba. Gary Giordano, a “friend” who took her on a vacation trip to the island, reported her missing. At 4 p.m. that same afternoon, Ms. Gardner was seen leaving a local restaurant.

When authorities and local citizens arrived after notice of Gardner’s disappearance, they immediately noticed that Mr. Giordano’s was sweating profusely and had a noticeable scratch on his neck.  Mr. Giordano, a then-50-year-old business man, said that he and Ms. Gardner had been snorkeling together. He indicated that the currents were getting strong and they decided go back to shore. He said he lost sight of Ms. Gardner, and he thought she had been taken offshore by the strong currents.

Robyn Gardner has been missing from Aruba since 8/2/11 – http://t.co/f9ECFCVk pic.twitter.com/IXXIuzj0

Local authorities searched the immediate area with no luck. They eventually brought in cadaver dogs to try to find Ms. Gardner, but nothing was found.

Mr. Giordano tried to leave Aruba to return to the U.S. within days of reporting the disappearance, but was stopped and detained by the local police. Due to inconsistent elements in his story, authorities wanted to question him further.

Police also became aware that Mr. Giordano had taken out a $1.5 million life insurance policy on Ms. Gardner, naming him the beneficiary shortly before the trip to Aruba. Furthermore, a video surfaced that showed Mr. Giordano and Ms. Gardner in a heated argument. According to court documents, the video depicted Mr. Giordano putting his hands around Robyn’s throat and forcing her into an elevator. Prior to the trip, Mr. Giordano racked up a couple of restraining orders against him from previous relationships in the U.S.

While the police continued to search for Ms. Gardner, Mr. Giordano was held in jail until he was released in November 2011 by a local judge who felt there was insufficient evidence to hold him. Giordani returned to his home in Maryland.

It’s  believed that Ms. Gardner and Mr. Giordano met through a online dating service and had known each other for some period of time.

People close to Ms. Gardner, including a live-in boyfriend at the time, Richard Forester, said that Ms. Gardner had no interest in snorkeling or even getting her hair wet.

“She wouldn’t go in the water above the waist because she wouldn’t want to mess up her hair.”

Anyone with any information on Giordani or Gardner should contact the local FBI or the American Embassy or Consulate.