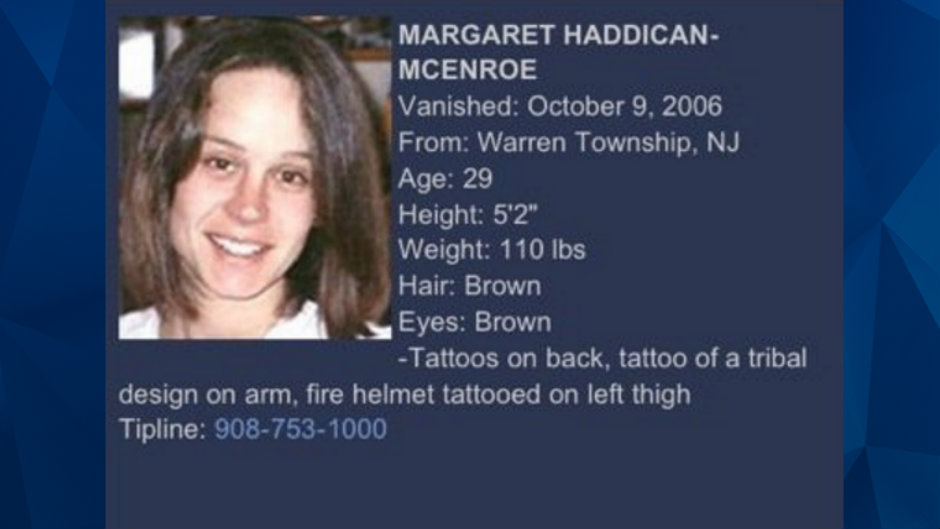 Margaret Haddican-McEnroe, a firefighter with the Mount Bethel Fire Company, was last seen at approximately 1:30 p.m. on October 10, 2006, at her own home Warren Township, New Jersey. Her husband says he left for the store to buy baby formula at around 1:30 p.m. That’s the last time he saw her.

Significantly, Margaret’s husband said that left their 5-month-old infant home alone in a crib and completely unattended, which she had never done before to the knowledge of anyone.  This was highly unusual.

He also says she may have taken extra clothing at the time she left and could be using her birth name prior to her adoption. Her husband reported $11,000 in cash missing when she left.

“I spoke to her the Monday before she went missing. She had called me during the day and she asked if she could bring the kids over the next day,” said Margaret’s mother, Eileen Haddican. And then I spoke to her again at night and [sic] she said she wouldn`t be coming over that night, that she was coming over the next day, and that she would leave the kids and then go back and get some stuff because she had asked if she could stay with us. It was more of a, ‘Would it be all right if I came over with the kids? Could we stay for a while? Could we stay forever?  [Sic]I`ll be over tonight.’”

And then, Margaret was gone.

Margaret Haddican typically carried one credit card. Police confirmed there’s been no activity on the credit card, nor on her personal bank account. Her car and cell phone were found left behind.  Did she leave on foot?  Why wasn’t  she spotted by neighbors?

Her husband didn’t report her missing for two days. After finally filing a missing persons report, he told authorities that she had left before, but never for this period of time.

Six weeks later, an Army T-Shirt of Margaret’s was discovered about a mile from her home, on Thanksgiving Day, 2006.  Scientific tests on the shirt yielded no clues, but the shirt was not weathered, indicating it had not been outside for long.