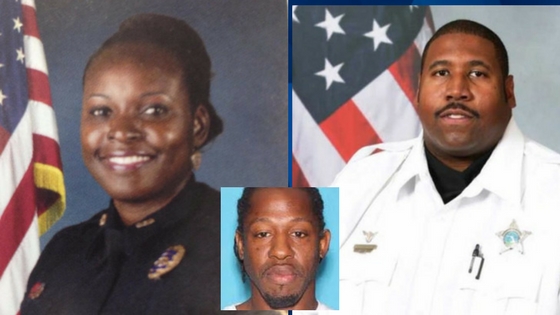 Orlando cop killer crawled out of hiding in body armor, loaded with 100 rounds and two guns

Markeith Loyd is custody after a nine-day manhunt

After a nine day long manhunt in Central Florida, the alleged killer of veteran Orlando Police officer Lieutenant Debra Clayton, was finally captured and arrested on Tuesday evening. As the suspect, Markeith Loyd, was taken into the Orlando Police Headquarters, he was seen covered in bandages and claiming that local authorities had “beat him up.”

Loyd’s manhunt also claimed another officer: Sheriff’s Deputy Norman Lewis, was killed in a motorcycle accident during the pursuit for the suspect.

On January 9th, Lt. Debra Clayton had been in the parking lot of a local Walmart when she was given a tip that, Loyd, who had been wanted questioning in the murder of his pregnant ex-girlfriend, was in the store. Loyd encountered Lt. Clayton as she approached the store to apprehend him, and fired multiple shots, killed the veteran officer. Loyd then  got in his vehicle and drove to a nearby apartment complex where he carjacked another car. During the extended manhunt, three people were arrested and charged with aiding the suspect.

On Tuesday evening at 7 p.m., the SWAT team surrounded a suburban Orlando home where Loyd was hiding and demanded the suspect surrender. He first tried to crawl out a back door but was stymied there, and eventually emerged from the front of the home. He was wearing extensive body amour and was in possession of two handguns, one of which had a 100 round magazine. The Orlando police placed Lloyd in Lt. Clayton’s handcuffs as a tribute to the fallen officer.

Loyd was arrested on multiple charges, including two first-degree murder charges, and could face the death penalty if convicted.