Rapper 2 Chainz, co-owner of Escobar Restaurant and Tapas in Atlanta, is under pressure to clean up the eatery after it failed inspection due to numerous hygiene violations.

The Atlanta Journal-Constitution reports that the Georgia Department of Public Health gave the restaurant a failing grade after inspectors noticed numerous hygiene issues, including dirty tables and floors, raw eggs and meat stored above vegetables, lack of soap and paper towels, expired milk, food stored at wrong temperatures, a “red and black mold-like substance” inside an ice machine, and numerous other health and hygiene violations.

2 Chainz’s Atlanta eatery is one of many in Atlanta to get the unhealthy status.https://t.co/R16WtkTBoH pic.twitter.com/bbFHhlN4PE

The report also read that the person in charge of the restaurant (PIC) was “not demonstrating knowledge in several food-borne illness risk factors.” 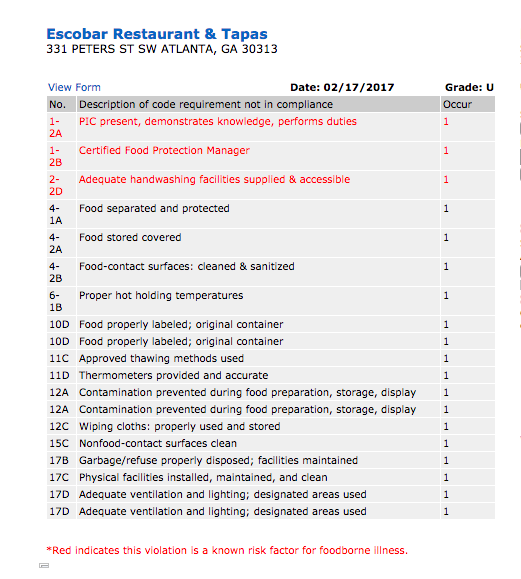 A spokesperson for the restaurant, Justin Andrews, acknowledged the issues and gave assurance that all violations would be corrected. He said he looked forward to the next inspection.

“We hang our hats on being champions of service.”

The restaurant’s failing grade is a far cry from the 99 “A” grade it received in October 2016,  shortly before its opening date. A re-inspection of the restaurant is scheduled for March 3.

Escobar Restaurant and Tapas is located off of Peters Street Southwest, in Atlanta. 2 Chainz co-owns the restaurant with Mychel “Snoop” Dillard.