How a murderer landed on reality TV: Aphrodite Jones talks ‘Megan Wants a Millionaire’ killer, unmasks what happens behind the scenes

Reality shows date back to the 1940s, but it wasn’t until the 1990s and early 2000s that reality TV exploded into global proportions. The shows became so popular and lucrative that some people became obsessed with becoming rich and famous through reality television, while producers were happy to help, even if meant overlooking criminal backgrounds, as long as ratings poured in.

CrimeOnline spoke with author and investigative true crime journalist, Aphrodite Jones, who opened up about a reality show star who shocked the nation and changed reality TV forever after he murdered his own wife, peeled off her nails, pulled out her teeth, stuffed her in a suitcase and tossed her into a California dumpster.

I could reminisce on Golden Era VH1 all day. It was destroyed when a contestant from "Megan Wants A Millionaire" left his gf in a suitcase pic.twitter.com/jJY5WC4yiX

The story began in 2009 when reality show star, Megan Hauserman, landed her own reality series, Megan Wants a Millionaire. The premise of the show was to find Hauserman, a prospective “trophy wife,” a man worth millions who would love her and marry her. It seems like many women’s dreams, but it quickly estimated into everyone’s nightmare.

“According to a source, a number of these guys were not millionaires. In fact, one was a plumber and one was a bartender,” Jones said. “Not that there is anything wrong with that, but they are pretending to be millionaires, and the show was putting them on as millionaires.”

Ryan Jenkins was one of the “pretenders.” Although he came from a wealthy family, he himself was not a millionaire, yet he somehow made it through VH1’s reported lenient requirements. The show introduced Jenkins as a Canadian investment banker, worth $2.5 million, none of which were true.

To make matters worse, although Jenkins passed a multiple-choice psychological quiz, he was never fully vetted by a professional psychiatrist or any kind of mental health professional before he was allowed a spot as a contestant on the show. Further, his 2007 conviction of domestic violence was somehow overlooked by the producers, and he was presented onto the show as a rich, successful businessman with a clean criminal background.

This is a model named Jasmine Fiore. pic.twitter.com/PVIURh2Fli

Jenkins ended up getting third place in the show, and was sent on his way to star in, and win first place in another show, I Love Money (Season 3). While filming the latter series, he ended up marrying a Las Vegas model, Jasmine Fiore, a “part of the party elite arm candy,” according to Jones.

While Jenkins was looking for a way to become a legal resident of the U.S., Fiore was looking for success and money. According to Jones, Jenkins had an agreement with Fiore where he would pay her a large sum of money each month if she married him. Fiore apparently thought that meant the marriage was a business deal and not a romantic deal, and she continued to see other men, which enraged Jenkins.

The emotional and physical abuse began within days of the couple’s quickie wedding. Jenkins reportedly slapped Fiore in front of a group of people at a poolside and belittled her constantly. In July, she broke off the relationship, but within a week, Jenkins sent a letter to Fiore, begging for one more chance. She obliged, which ended up being a deadly mistake.

“If you can come back to me and stop all the craziness, we can have a wonderful life … your forgiveness, trust and loyalty is all I need right now and when your love for me grows and our lives are heading in the right direction, I’ll truly feel complete. I will never leave you. I only want you.”

On August 13, 2009,  the couple checked into the L’Auberge Del Mar Hotel in San Diego, and within two days, Fiore was dead. Jenkins murdered Fiore so brutally that it was unfathomable that he was the same man that just months earlier, charmed his way into 3rd place on a reality show.

Later, he fled to Canada and hanged himself in a hotel bathroom, without explaining himself, leaving Fiore’s family with no answers and no sense of closure.

As devastating as the incidence was, even scarier are the lives that were put at risk at the hands of producers who failed to properly vet a contestant before allowing him on a national television show. How often does this go on? How well do we really know the “characters” that we see portrayed on our favorite reality shows? And should these shows be held accountable if someone should become injured by a contestant who was never thoroughly checked? 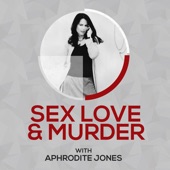 Jones explores the Jenkins case, as well as the dangers of reality shows, in-depth, on her upcoming podcast show, Sex, Love, & Murder, premiering Saturday at 11 p.m. Each week, Jones will dig deep into additional cases “that break every American taboo,” including “murders involving love triangles, twisted love affairs, cheating scandals, and stalking, you name it.”