The man accused of killing his 2-week-old baby and hiding her in the woods behind his Covington, Georgia, home, was denied bond during his first court appearance on Thursday morning.

According to Newton County court documents, Christopher McNabb is accused of aggravated battery, felony murder, malice murder, and concealing the death of another, in relation to the death of his 15-day-old daughter, Caliyah McNabb. The Newton County Medical Examiner’s Office reported that the baby died from blunt force trauma.

NEW: 1st hearing for Christopher McNabb, charged in murder of his 15 day old daughter, lasted all of 3 minutes. No bond. @wsbtv pic.twitter.com/t0apGIq8Ug

The warrant against the suspect states that baby Caliyah suffered a blow so severe to her head that her skull was “seriously disfigured and damaged beyond repair.” After causing fatal injuries to the infant, McNabb wrapped her in a blanket and one of his t-shirts and put her into his duffel bag, according to the warrant. He then reportedly took Caliyah into the woods and buried her in a depressed area under a log. 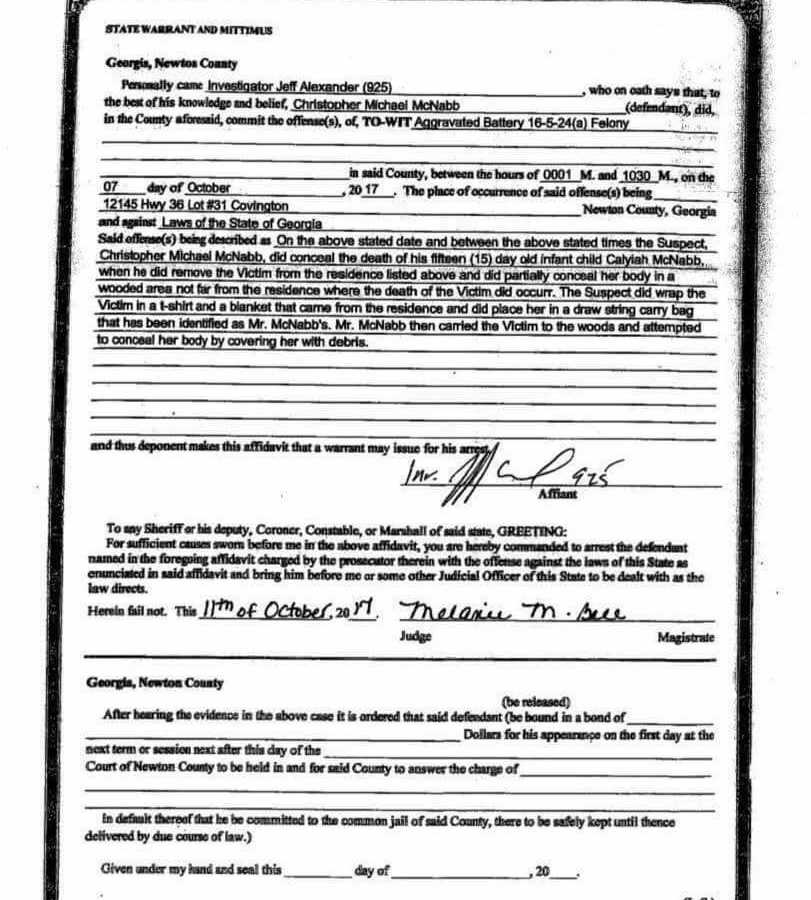 Capt. Crum with the Newton County PD said that along with evidence found at the crime scene, McNabb made incriminating statements when first interviewed on Saturday.

“I think we know and can prove in a court what happened and that’s the next step,” said Crum. “He had made a couple of initial statements then he indicated to investigators he did not wish to talk anymore.”

Detectives working the case said in court that the crime was planned. They indicated there would be evidence to prove that he “planned her murder,” then attempted to hide her in the woods inside his own duffel bag.

McNabb, who has a long history of non-violent crimes, jumped out of a car on Sunday when he heard that Caliyah had been found. He ran to a nearby convenience store and started shouting to a store clerk, who had no idea who he has, that he didn’t kill his child, according to Fox5.

“I was standing there waiting on customers. He came in and somebody said ‘That’s him.’ I looked at him and said ‘That is him. That is him,’” store clerk Julie Hannah told Fox5.

“He come back up here and he started talking to me and he says, ‘You know me? You recognize me?’ I said, ‘No.’ He says, ‘I was in here last night talking to you guys about my baby getting kidnapped,” said Hannah. “He went on and on and on just rambling ‘I didn’t do it. It wasn’t me. It wasn’t the baby’s mama y’all going to look crazy when you figure this out.’”

McNabb is scheduled for a hearing in front a grand jury on Nov. 3. Check back with CrimeOnline as additional details become available.

With no signs of forced entry or foul play, the 2-week-old baby girl disappeared from her family home in Covington, Georgia, in the early morning hours on Oct. 7. A family is desperate for answers.

CrimeOnline spoke exclusively with a friend of the family, who we are keeping anonymous at this time. The friend said that the family claimed they fed baby Caliyah at around 5 a.m. in the morning, then went back to sleep. When they checked on her between 9:30 a.m. and 10 a.m., Caliyah was gone. Another child in the home, a 2-year-old little girl, was safe, sleeping in her room.

Authorities brought in search and rescue dogs, who followed Caliyah’s scent for up to a mile before losing the trail. Without much to go on, authorities are hoping the public can offer assistance. According to Capt. Keith Crum with the Newton County Sheriff’s Office, there are no suspects or persons of interest at this time.

A group of volunteers searching for a missing 2-week-old baby in Newton County, Georgia, discovered the body of a tiny, lifeless baby inside a bag, in a wooded area close to the parents’ home.

WSB-TV reports that family members believe that the body of the infant is that of Caliyah McNabb, a baby girl who disappeared from her family’s home on October 7. The family reported feeding the baby at 5 a.m., then checking on her again at 10 a.m., when they discovered her missing.

An autopsy for the 2-week-old baby girl found dead in a wooded area in Covington, Georgia, is scheduled for Monday morning, the Newton County Sheriff’s Office (NCSO) confirmed.

NCSO Captain Keith Crum told CrimeOnline that the body of an infant found deceased on Sunday afternoon, is likely of Caliyah McNabb, who disappeared from her family home on Saturday. The baby’s parents, Chris McNabb and Cortney Bell, allegedly said that they fed the baby at around 5:00 a.m. on Saturday. They claimed when they checked on her at around 9:30 a.m. to 10 a.m., she was gone.

On Sunday afternoon, volunteer searches found the body of a tiny baby wrapped in a blue blanket, inside a duffle bag and hidden under a log. She was found in an area that authorities previously searched, but according to Crum, they didn’t find her the first time because someone carefully hid her in a depression, then placed the log over her.

A family friend spoke exclusively to CrimeOnline and said that she was in the process of driving the parents, along with Bell’s mother, to an interview with a local station when they caught wind that searchers located a baby. According to the friend, McNabb immediately jumped out of her car at a red light and fled.

“I personally drove Cortney to her home in the trailer park off 36. The father left my car at a red light a few miles away from the trailer park they live in. Cortney, me, her mother, and a family friend were brought to the county jail for questioning. Chris was found in a timely manner not far from where he left my car.”

McNabb didn’t make it far before authorities caught up to him. Store clerk, Julie Hannah, told FOX 5 Atlanta that she witnessed the police detaining McNabb after customers inside the convenience store the suspect stopped at called 911.

A customer inside the store at the time, Debra Devereux, said that the suspect shouted that he didn’t harm his baby.

McNabb is not charged in connection with the infant’s death. Police arrested him on an unrelated probation violation, in connection with a burglary incident, according to Crum. Bell drove to NCSO after the baby was found. After authorities questioned here, they let her go.

Additional charges may follow depending on the results of the autopsy.

Caliyah Mcnabb was only 2 weeks old when her mother, Courtney Bell, dialed 911 on Saturday morning to report her missing. The recording was recently released by Newton County authorities.

According to 911 call, Bell’s 2-year-old child woke her up and told her that baby Caliyah was missing. Bell stated that the child’s father, Chris McNabb, was sleeping beside her when the toddler woke them both up. Bell claimed McNabb was home throughout the night and left the next morning to search for the baby after they discovered her missing. She also said  she fed the baby at 5 a.m., but by 10 a.m., the infant vanished.

Caliyah McNabb spent two short weeks alive before dying at the hands of another. Authorities said the person accused of the baby’s death is her own father, Christopher McNabb. He’s expected to be charged with infant’s death on Wednesday morning, according to The Citizens.

Newton County Coroner, Tommy Davis, announced on Tuesday afternoon that the baby’s manner of death is listed as homicide.

“It is going to be blunt force head trauma. The manner of death is homicide.”

Sheriff’s Office spokesperson Jeff Alexander announced that charges are expected to be brought against McNabb, but he didn’t specify the exact charges.

“At this point, we’re in conference with the District Attorney’s Office. to come up with the probable charges. There will be charges coming probably first thing in the morning.”

McNabb is currently behind bars on an unrelated probation violation charge.

Capt. Keith Crum with the Newton County Sheriff’s Office told CrimeOnline that McNabb will be charged with malice murder, felony murder, aggravated battery, and concealing death. His first court appearance is scheduled for sometime on Thursday.

So far, McNabb is the only person charged in connection with the baby’s death. Check back with CrimeOnline as additional details become available.