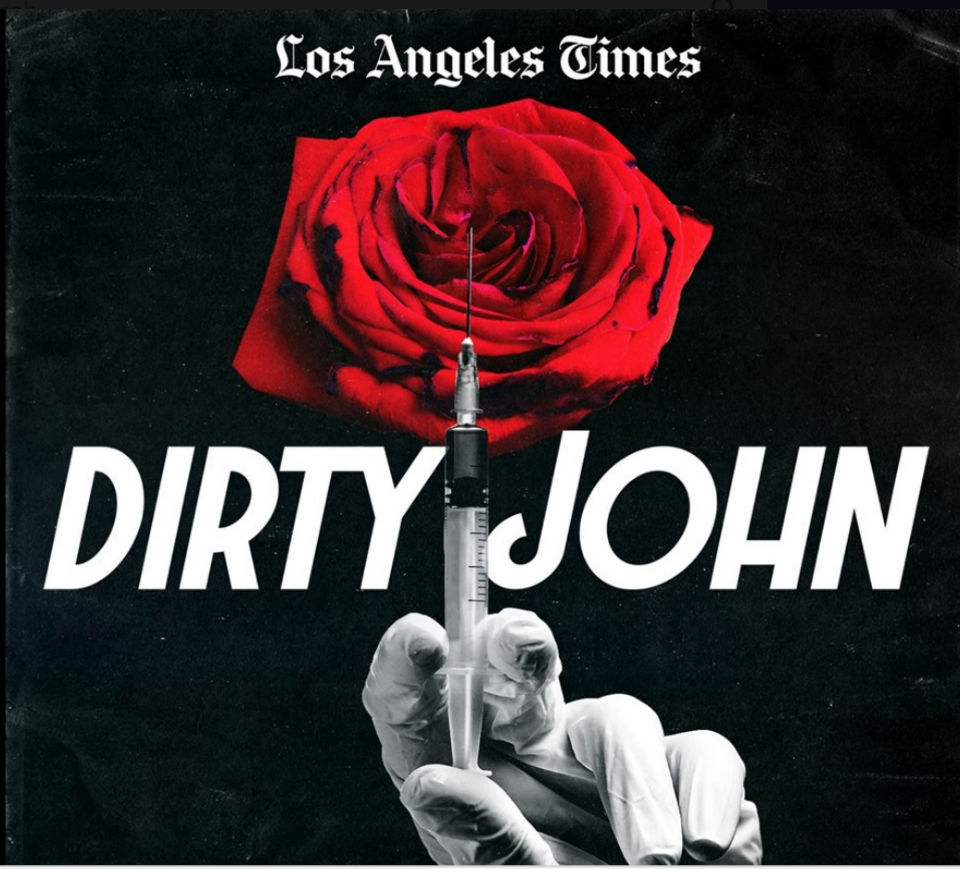 The gripping podcast tells the story of an affluent Southern California family whose unwavering belief in forgiveness may have invited violence and chaos into their lives. Spoilers abound.

She wanted out of the marriage long before she took steps to leave it. And Cindi Newell Vickers had already separated from her husband the day he shot her in the back of the head point-blank, a clear-cut murder that would find him behind bars for only two years.

Three decades later, her younger sister barely escaped a similar fate. The podcast Dirty John, hosted by Christopher Goffard, documents the chilling events of a year that tore Debra Newell’s family apart, and ended with her youngest daughter improbably saving her own life in an adrenalin-fueled fight to the death, using a technique she had learned from studying episodes of The Walking Dead.

Here is a family in the luxurious but isolated enclave of Orange County, California; led by successful, beautiful, kind, and by all accounts self-sufficient women bound by a tragic past. Because of Cindi’s murder, Debra, the owner of a successful interior design firm, would not permit guns in her upscale homes, but she let in a homeless drug addict who eventually threatened to kill her own children. Even as he told her daughter to jump head-first from a tall building, Debra, despite her fears, couldn’t fully disentangle herself from a man who she had believed was her last chance at love, who took care of her every need — as long as he remained the central focus of her attention, to the exclusion of everything and everyone in her life.

From the start, Debra’s daughters — the headstrong Jaquelyn and the more delicate Terra — were suspicious of John Meehan, an anesthesiologist nurse their mother had met on a dating website. But Debra refused to heed their warnings, along with the clear signs that Meehan was not the white knight he pretended to be, and kept her marriage to him a secret as she desperately tried to balance a dangerously dysfunctional family dynamic.

Even as the daughters, along with their cousin Shad — who Debra had raised as her own after her sister Cindi was murdered — presented their mother with overwhelming evidence that John Meehan a grifter with a long and shady past of preying on women, Debra stood by him. And even after she was confronted with clear documentation that Meehan was a no-good crook with a criminal past, after a brief separation he talked his way back into her life.

By that time Debra knew that John kept cyanide hidden in a storage unit, and had come home once to find a strange woman standing in her living room, wearing clothes she had taken from her closet and drinking a glass of Ovaltine. But despite her own growing uneasiness, Debra continued to John the benefit of the doubt. Because he made her feel special.

“He treated me so well,” Debra said. “It was as if I was the only thing on Earth.”

Whether it intends to be or not, Dirty John is an indictment of a culture maliciously beholden to the idea that even the worst of the worst men are entitled to second and third and fourth chances; the unflagging faith in the redeemability of predators based on the very same artifice they use to lure their victims into a web of deception and violence.

Debra’s willful ignorance about her husband’s true nature is astonishing, and often times infuriating. But Dirty John‘s fourth episode, “Forgiveness,” sheds some light on why Debra was so willing to believe that her husband wasn’t a monster.

After 14 years of marriage to Billy Vickers, who Cindi Newell Vickers married when she was a teen, the mother of two finally separated from a man she said was deeply controlling and abusive. She had been unhappy for a long time, but despite her complaints to her family, they never turned on her husband.

Her mother, Arlene Hart, who like Debra is a devout Christian, says on the podcast that she still loved Billy despite his trouble with her daughter. She recalls Billy telling her after Cindi filed for divorce, “I can’t let her go.”

In March 1984, when divorce proceedings were underway, Cindi was at the house she and Billy had just put on the market paying bills when Billy walked up behind her and shot her in the head, before turning the gun on himself.

Cindi was killed, but Billy would survive.

Arlene says on the podcast that Billy later called the family to apologize, and she told him that she still loved him.

“And he said, ‘How could you love me? How could you?’ And I said, ‘God has given that love to us for you. We love you, and we forgive you.’ And he just sobbed and he cried.”

Such was her love for the man who murdered her daughter that Arlene offered to testify in his defense at his murder trial, believing that he was not in his right mind when he shot her daughter, who had two young sons at the time.

Prosecutor Thomas Avdeef told the Los Angeles Times that Arlene and other family members testified that Cindi had mistreated Billy.

“They threw her under the bus,” Avdeef said.

“I don’t know the dynamics of the family. I could never understand that. Why say bad things about the victim?”

In the end, after a jury deadlocked, Billy pleaded guilty to voluntary manslaughter, and was sentenced to five years. He served only two, and once he was released he remarried and settled down not far from where he killed Cindi, and where her family still lives.

As Dirty John reveals, Debra finally came around to her family’s insistent warnings. And though the women eventually freed themselves from John Meehan, the chain of events very nearly led to a very different, and far more tragic, outcome.