A recently-revealed autopsy report in regards to a Texas toddler girl found deceased in Oct. indicates the child’s official cause of death is “homicidal violence.”

The Houston Chronicle reports that on Wednesday, authorities confirmed the findings in the autopsy report on Sherin Mathews, 3, who was found dead inside a culvert in Oct. Earlier that month, her adoptive father, Wesley Mathews, reported the child missing and said she disappeared after he put her outside of their Richardson home at around 3 a.m. for not drinking her milk. He later changed his story and reportedly told authorities while helping Sherin drink her milk, she choked and stopped breathing.

As CrimeOnline previously reported, authorities initially arrested Mathews on charges of “abandoning or endangering a child.” Later, authorities upgraded his charges to first-degree felony injury to a child. Authorities also arrested Sherin’s adoptive mother, Sini Mathews, and charged her with “child endangerment or abandonment relating to the death.”

It’s still unclear whether the suspects’ charges will upgrade to murder, but Sini Mathews’ attorney, Mitch Nolte, indicated that there wasn’t evidence that pointed to his client participating in any way in Sherin’s death.

“There is nothing in the autopsy results that indicate Sini Mathews had anything to do with the death of Sherin Mathews,” Nolte said, according to ABC8.

Timeline on the Disappearance of Sherin Mathews

Texas authorities issued an AMBER Alert for a 3-year-old girl, said to be in grave danger.

ABC13 reports Sherin Mathews, 3, disappeared from the 900 block of Sunningdale at around 3 a.m. on Saturday, in Richardson. She was last seen wearing black pajama bottoms and a pink shirt.

Anyone with any information is urged to contact the Richardson Police Department at 972-744-4801 immediately.

New details are emerging in the case of a 3-year-old little girl in Richardson, Texas, who disappeared at around 3 a.m. on Saturday. Authorities broadcast an AMBER Alert on the child on Saturday morning when she vanished from her backyard.

NBC 11Alive reports that Wesley Mathews reportedly put his daughter, Sherin Mathews, in the family home’s backyard as a form of punishment when she refused to drink her milk earlier that evening. Police said that Mathews claimed he checked on his daughter around 15 minutes later and she was gone. The little girl disappeared from the 900 block of Sunningdale wearing black pajama bottoms, black flip flops, and a pink shirt.

According to a police affidavit, Mathews said he spotted coyotes in the alley close to the family home, yet, he decides to wait five hours before calling for help. Authorities arrested Mathews on Saturday and charged him with “abandoning or endangering a child.”

Meanwhile, Sgt. Kevin Perlich reported that dogs walked door to door in the neighborhood, trying to track the little girl. So far, authorities have no leads.

“We’re trying to pick up any type of scent, or items of clothing, or anything like that, that might give us a clue she was there,” said Perlich.

Sherin, who stands 36 inches tall and weighs about 22 pounds, is a special needs child with limited verbal communication.

Police are looking for any evidence they can. They towed in the family’s two SUV and a minivan, in search “potential evidence.”

Authorities in Texas canceled an AMBER Alert for a 3-year-old special needs girl after failing to obtain a suspect or vehicle information connected to her disappearance. The little girl vanished on Saturday, leaving no clues aside from her father’s disturbing account of what happened the night before she disappeared.

Mathews, 37, told police that he put his daughter in the back yard after she refused to drink her milk earlier that evening. He claimed that he checked on her 15 minutes later but she was nowhere in site. Police subsequently arrested Mathews and charged him with “abandoning or endangering a child.”

Wesley bonded out of jail on Sunday evening, according to court records.

According to the affidavit, Wesley didn’t call 911 to report his daughter missing until after five hours after the fact. Further, he allegedly claimed he saw coyotes in the alley close to him home, but detectives found no evidence that an animal dragged Sherin away.

That does not seem like a normal response that one would do if you have a missing child,” Sgt. Kevin Perch said, referring to the father’s delay in contacting authorities.

Family members said that the Wesleys are a “nice family” and are in shock over the disappearance of their daughter.

Investigators seized three vehicles, cellphones, and laptops from the Wesley’s home, in an attempt to gather information that could possibly lead them to the girl. Authorities haven’t yet indicated what, if anything, was found.

Texas Child Protective Services (CPS) removed another child, a 4-year-old, from the Wesley home on early Monday morning. CPS spokeswoman, Marissa Gonzales, indicated that the agency dealt with the family before, but she declined to described why.

CBS DFW reports that the Wesleys are no longer cooperating with law enforcement. They recently hired an attorney to represent them.

Sherin stands 3 feet tall and weighs around 22 pounds. She was last seen wearing black leggings, a pink shirt and pink flip-flops. According to investigators, Sherin “suffers from developmental issues and has limited verbal communication skills.” Anyone with any information should call 972-744-4800.

Police in Richardson, Texas, found a body of a toddler on Sunday, who’s like Sherin Mathews, a special needs girl who vanished on Oct. 7.

WFAA-TV reports that drones assisted authorities in finding the little girl in an open field in an undisclosed location close to Richardson earlier last week, but came up empty-handed. On Sunday at around 11 a.m., the body of a small girl was found near Richardson, close to East Spring Valley Road, in a culvert.

Police are currently waiting for the FBI recovery team to arrive. The child’s identity and cause of death is still pending.

Sherin disappeared after 3:30 a.m. on Oct. 7, according to her father, Wesley Mathews, who claimed he put the little girl outside for not drinking her milk. He said he checked on her around 15 minutes later at 3:45 a.m., and she was gone. Authorities later arrested Mathews on child neglect and endangerment charges, but he has since bailed out and lawyered up.

Wesley Mathews, the adoptive father of missing toddler, Sherin Mathews, turned himself in to Texas police on Monday, on charges of “injury to a child.”

Fox News reports that Mathews, already facing child endangerment and neglect charges, “provided an alternate statement of events from those which he had given previously, regarding the disappearance of Sherin,” according to Richardson. The exact details of the statement made are undisclosed at this time.

Earlier this week, authorities found the body of a small child inside a culvert around half a mile away from the Mathews family home in Richardson. Although the body is likely of Sherin, authorities are awaiting an autopsy results before giving official confirmation.

At this time, Mathews is not facing a murder charge, although charges can upgrade depending on the cause of death and evidence gathered. The toddler’s adoptive mother, Sini Mathews, has not been charged.

The couple appeared in court this morning in an attempt to get their 4-year-old daughter returned to them after authorities took her from the home, but the judge ordered that the child remain in state custody until the next scheduled hearing in November.

The adoptive father of 3-year-old Sherin Mathews has changed his story regarding what happened the morning the little girl disappeared, according to Richardson, Texas, police.

As CrimeOnline previously reported, Wesley Mathews, 37, claimed his daughter, Sherin, disappeared a little after 3 a.m. on Oct. 7 after he put her outside to stand by a tree for reportedly refusing to drink her milk.

On Monday, authorities arrested Mathews and charged him with one felony count of injury to a child after he changed his story on what happened to the child. It wasn’t clear what the suspect changed his story to until Tuesday morning.

Fox 4 reports that according to an arrest affidavit, Mathews claimed that Sherin passed away after choking on her milk, a far cry from his previous version of events.

The affidavit also stated that Mathews said that Sherin began choking on the milk and shortly after, her breathing stopped. Mathews allegedly said he then removed the little girl’s lifeless body from their home off of Sunningdale Road in Richardson.

Mathews is not currently charged with murder, but detectives indicated that charges can be upgraded, depending on the results from the medical examiner’s office.

The suspect is behind bars on a $1 million bond.

Richardson, Texas, police announced this morning that the body of a little girl found on October 21 in a drainage area was that of missing toddler, Sherin Mathews.

According to the Richardson Police Department, the medical examiner’s office positively identified the child’s body as Sherin, who disappeared on Oct. 7 after her father, Wesley Mathews, claimed he put her outside at 3 a.m. for not drinking her milk. On Monday, Mathews changed his story and said he watched the little girl choke on milk accidentally before he removed her body from their home. 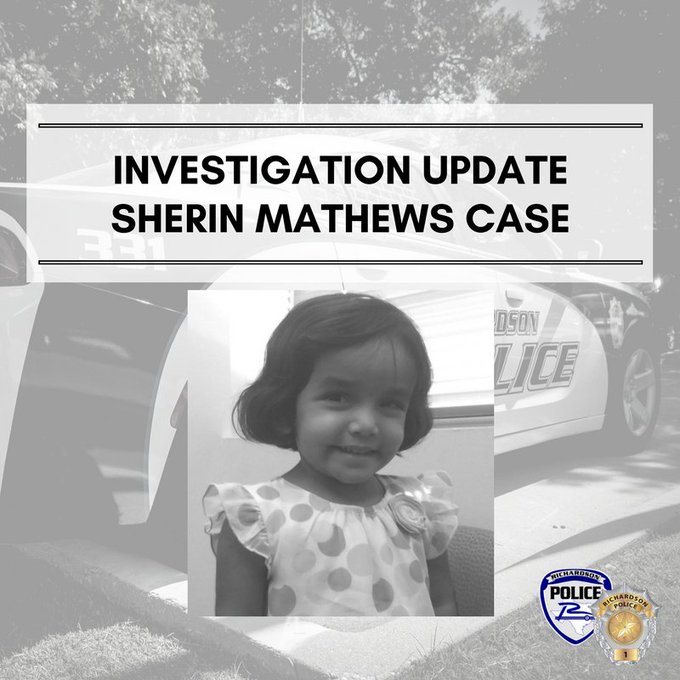 According to an arrest affidavit, Mathews changed his story on Monday afternoon and said he watched his child cough and slowly stop breathing.

She was coughing and her breathing slowed,” the affidavit read. “Eventually, Wesley Mathews no longer felt a pulse on the child and believed she had died.”

So far, Mathews has not been charged with murder, but detectives said that charges can be updated as they gather more information.