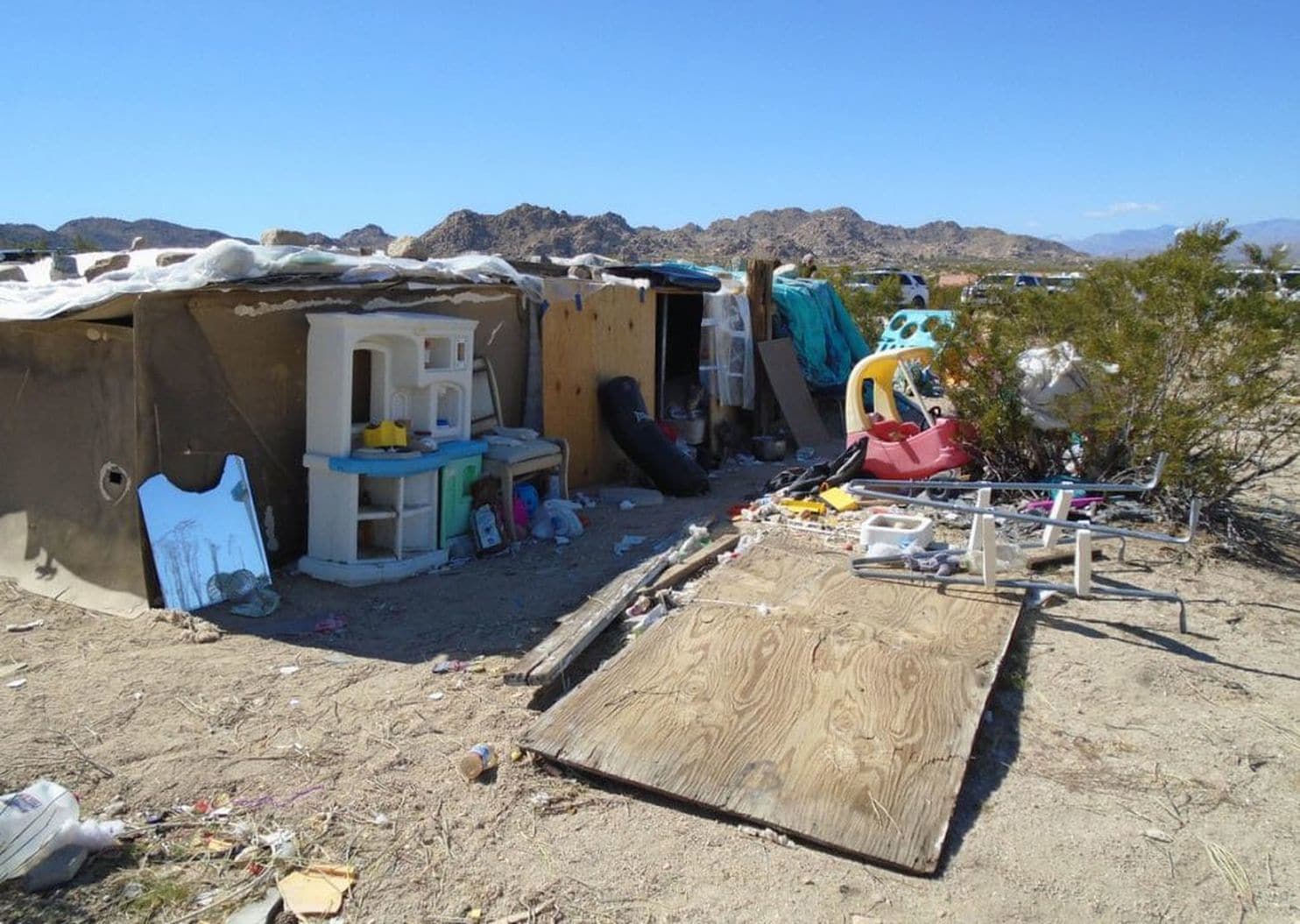 Couple forces three kids to live in tiny plywood shack with inadequate food and no running water, with over 30 cats roaming around inside

A California couple is facing child cruelty charges after police say officials found three children living in a tiny shack made of plywood in the Joshua Tree area.

CBS reports that three children, ages 14, 13 and 11, were found living in a plywood shack off of  7000 block of Sun Fair Road. At around 11 a.m. on Thursday, deputies with the San Bernardino County Sheriff’s Department arrived to the plywood shack in a remote area and found trash, debris, and human feces scattered about.

The children’s parents, identified as 73-year-old Daniel Panico and 51-year-old Mona Kirk, were arrested on child cruelty charges. The suspects lived in an equally dilapidated trailer close to the children’s small shack.

This is the trailer where the adults lived while 3 Joshua Tree kids lived in a box @MyDesert pic.twitter.com/oKKoXieCNH

According to The Washington Post, authorities indicated that the three children were living in a “large plywood box” with around 30 to 40 cats inside, and no running water or electricity. Deputies said it appeared that the children had been living in the run-down shack for several years. They also didn’t have enough food and used holes dug into the ground as toilets.

“The victims were found to have an inadequate amount of food and were living in an unsuitable and unsafe environment due to the conditions located on the property,” a sheriff’s news release stated.

Children and Family Services took the children into its custody.

Here's what it looks like in the box 3 Joshua Tree kids lived in. @MyDesert pic.twitter.com/s5QEhX6Qxp

Capt. Trevis Newport of the Morongo Basin Station indicated that it didn’t appear the couple was being malicious. Instead, he said the couple lacked money and resources and in turn, the kids lived without basic necessities. Newport also pointed out that although the children had no food, they didn’t appear malnourished. They were also free to roam around and weren’t confined to the small shack, according to the Los Angeles Times.

Yet, spokesperson for the sheriff’s department, Cindy Bachman, pointed out that California offers numerous services to people lacking the financial resources to properly care for their children.

A man and a woman face child cruelty charges after deputies found their three children in a box on a property in Joshua Tree. https://t.co/V61whNjijc

“It’s just tragic that these children were being raised in conditions like this. There are services available to help these folks, and clearly they chose not to ask for any help.”

The suspects face up to six years in prison if found guilty. Check back with CrimeOnline as additional details become available.