An arrest affidavit for the man accused of killing University of Iowa college student Mollie Tibbetts provides grim details about the alleged kidnapping and murder that left the small community of Brooklyn, Iowa shocked and saddened.

According to affidavit, filed at the Poweshiek County District Court on Tuesday at 2:39 p.m., 24-year-old Cristhian Bahena Rivera is accused of abducting and murdering 20-year-old Mollie. Rivera reportedly told investigators that he spotted Mollie jogging near Middle and Boundary Streets in Brooklyn on July 18, when he slowed down and started following her in his black Chevrolet Malibu.

At some point, Rivera got out of the vehicle and began following the University of Iowa student by foot, even jogging alongside her. Apparently frightened, Mollie told the suspect she would call 911, then pulled out her phone, according to Rivera’s reported admission. Rivera said he became upset and “blacked out” at the threat, something he claimed he did often when becoming too angry.

Rivera told investigators the next thing he remembered was waking up inside his car, parked at a rural intersection. He immediately made a U-turn and drove to the entrance of a rural field. He then drove into a driveway of a cornfield. Rivera said at some point he looked down noticed Mollie’s earpiece from her earbuds or headphones lying on his lap, and “realized he put her in the truck.”

Upon checking the trunk, Rivera said he found Mollie inside, with one side of her head bloodied, according to the affidavit. The suspect said he pulled Mollie out of the trunk and dragged her by foot into a secluded area in the woods. He then tossed her over his shoulders and walked around 20 meters into the woods, where he tossed her body on the ground and covered her with corn leaves.

While talking to authorities, Rivera described by memory where he left Mollie. The information, along with a digital footprint from Mollie’s Fitbit watch, helped lead investigators to her body. Investigators found a female’s lifeless body in the area Rivera led them to. The deceased victim was wearing “certain articles of clothing” Mollie was last seen wearing. 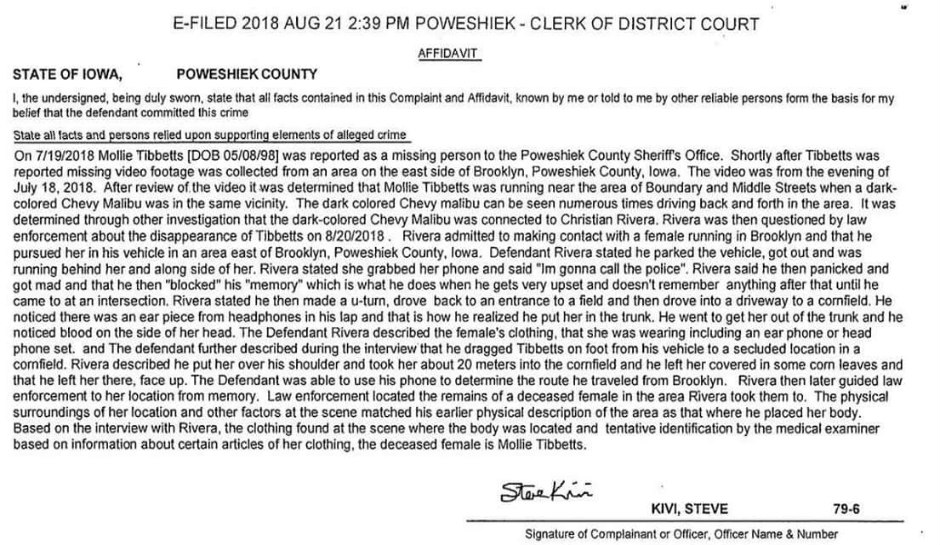 Rivera, a reported undocumented immigrant who entered the country illegally, had been living in the Brooklyn area for around four to six years before the incident occurred. He worked at a local dairy farm and the owners who hired him said Rivera passed an “E-Verify” check, a web-based program used to determined a potential employee’s legal eligibility to work in the U.S.

Authorities indicated that Rivera typically “kept to himself” was not initially on their radar until a local Brooklyn resident provided surveillance footage that showed the suspect’s vehicle driving back and forth in the area where Mollie jogged on July 18.

“From that we were able to track his pattern in the routes in which he took,” Rick Rahn, special agent in charge at the Iowa Division of Criminal Investigation, said on Tuesday.

On Wednesday, Rahn indicated that Rivera wasn’t thought of initially since the suspect had never been in trouble with the law before and wasn’t known to local officers.

“He certainly wasn’t known to the local police department. So we, through our interviews and conducting a number of different canvas interviews throughout the community, we weren’t aware of him until we were able to locate the video. So it’s not like he was on anybody’s radar throughout the investigation.”

An autopsy is scheduled for Wednesday, which will likely determine the official cause of death.