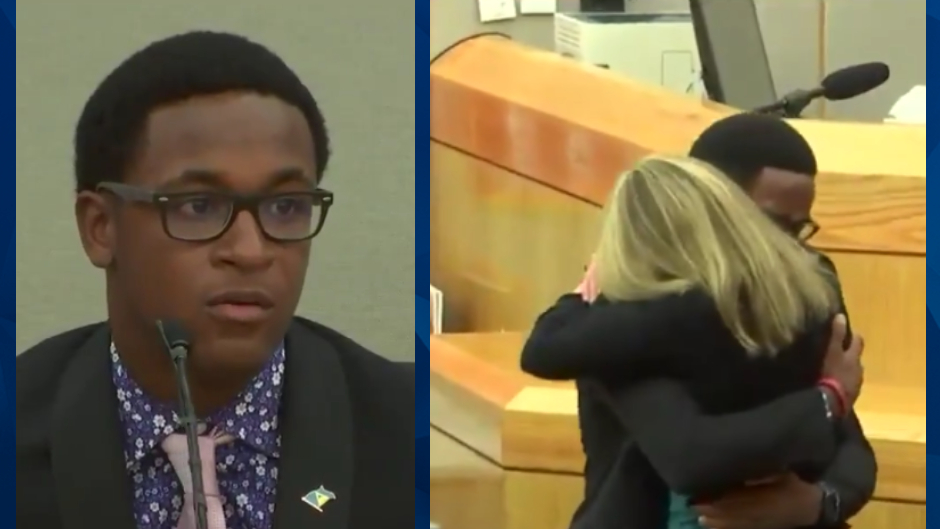 SEE IT: Botham Jean’s younger brother hugs cop who shot victim dead in his own apartment

The brother of the Texas man who was fatally shot in his own apartment by a then-police officer last year embraced his brother’s killer before she was sent to prison.

Botham Jean’s brother, Brandt Jean, 18, briefly took the stand on Wednesday to provide a victim impact statement. After saying that he forgives ex-cop Amber Guyger, 31, Brandt Jean asked the court to hug the convicted murder— a request that was granted by presiding judge Tammy Kemp.

“I love you like anyone else,” Brandt Jean told Guyger.

"I don't even want you to go to jail. I want the best for you, because I know that's exactly what Botham would want." https://t.co/sWaPUtS0kj pic.twitter.com/xPAIKQLh6z

Loud sobs rang out in the courtroom as the pair embraced. Moments later, Kemp, who was spotted wiping away tears, came down from the bench to speak with Guyger. While it’s unclear what was discussed, Kemp and Guyger also embraced before Guyger was sent to serve her 10-year sentence for killing Botham Jean, 26, last year.

Guyger — who’s eligible for parole after five years — faced anywhere from 2 to 99 years for shooting Botham Jean in his Dallas apartment. While Guyger claimed Jean was walking aggressively towards her when she opened fire, prosecutors argued that the victim was either sitting down or cowering when she shot him.

Indicted on murder charges late last year, Guyger claimed mistook Jean’s apartment for hers. She told police that she had finished a long shift when she parked her car on the fourth floor of her apartment building instead of the third floor where she lived.

Guyger said the door was slightly ajar when she placed the key into the keyhole, causing the door to open further. Documents stated that she claimed she saw a “large silhouette” and gave it verbal commands before opening fire, fatally wounding Jean in his torso.