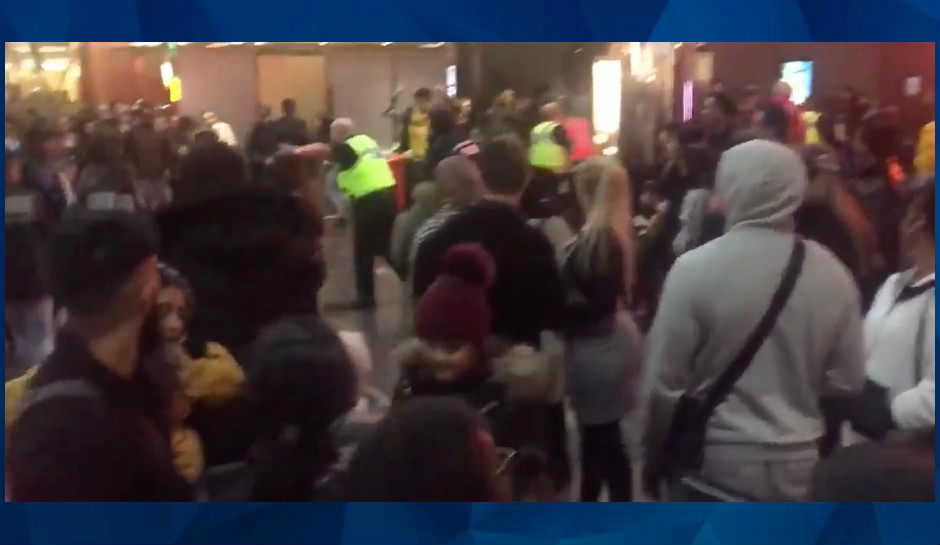 British police have arrested six teenagers following a brawl at a Birmingham cinema on Saturday that also left a number of police officers with minor injuries, West Midlands Police reported.

The scene at the Star City entertainment complex was one of pandemonium as police encountered the crowd, some of whom were fighting while others were there to simply see a movie, including children in Elsa costumes waiting to see Disney’s Frozen 2.

Police were called to the cineplex at about 5:30 p.m. when crowds of young people entered the theater area, some reportedly with machetes.

West Midlands Police said they were able to disperse the crowd after about two hours and had to use Tasers when they were met with hostility. At its height, police said, 100 people were involved in the fighting.

Police said they seized two machetes on the scene and a knife found on a nearby roundabout, but there were no reported stabbings.

The five have been released on bail under conditions that bar them from leaving home at night and ban them from Star City and all theaters in the United Kingdom.

Another 14-year-old boy was arrested on Sunday “on suspicion of violent disorder after an image circulated on social media showed a number of youths with one carrying a machete,” police said.

Some witnesses said the fighting was over the “Blue Story,” based on YouTube videos about gang culture in southeast London. As a result, Vue Cinemas, the UK’s third biggest screen operator pulled the film from its 91 theaters across Britain, The Guardian reported. Police, however, said they have not determined that the film was the spark for the brawl.

Rachael Allison, a journalism student at the University of Salford in Manchester, was on hand to see “Blue Story” and filmed the scene: