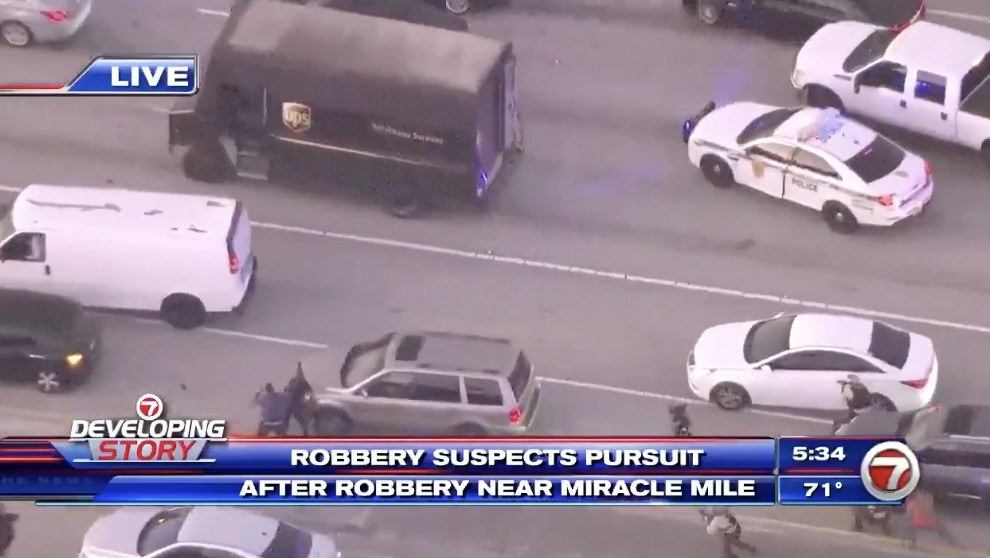 A jewelry store robbery took a wild turn in south Florida on Thursday, ending with a high speed chase in a stolen UPS truck and a deadly shootout — broadcast live on local television — that left four people dead.

Two other people were injured in a vehicle crash caused by the chase but were not shot, WSVN reported. They refused treatment.

The incident began at about 4:15 p.m. Thursday on Coral Gables’ Miracle Mile when two men tried to rob a jewelry store. They exchanged gunfire with the store owner and fled in a U-Haul van, Coral Gables Police Chief Ed Hudak said at a news conference. A few blocks away, they ditched the U-Haul and car-jacked a UPS truck, abducting the driver and fleeing.

Police apparently caught up with the truck as it sped up the Florida Turnpike, onto Okeechobee Road, and then Interstate 75 into Broward County. The Miami Herald reported that the robbers fired at police during the chase.

The truck exited the freeway and raced through streets, breaking through a traffic arm at one point. At about 5:30, in the midst of rush hour traffic, the UPS vehicle slowed to a stop on Miramar Parkway, 25 miles from where the chase began.

As television news cameras filmed from helicopters, gunfire erupted from police officers and inside the truck. When it was all over, the two suspects were dead, along with the UPS driver and an innocent bystander inside a car caught up in the madness, the Miami Herald reported.

The Herald also reported that an employee at the jewelry story was hit by a ricocheting bullet and taken to the hospital, treated, and released. Another bullet hit a window in the office of the city clerk at Coral Gables City Hall, across the street from the store. Dozens of police markers could be seen in a alleyway beside the jewelry store.

“The bullet ricocheted off the wall and landed on the floor,” City Clerk Billy Urquia said, adding that the bullet missed him by two to three feet. “The last one I heard was the one that came in.”

The FBI has taken the lead on the investigation.