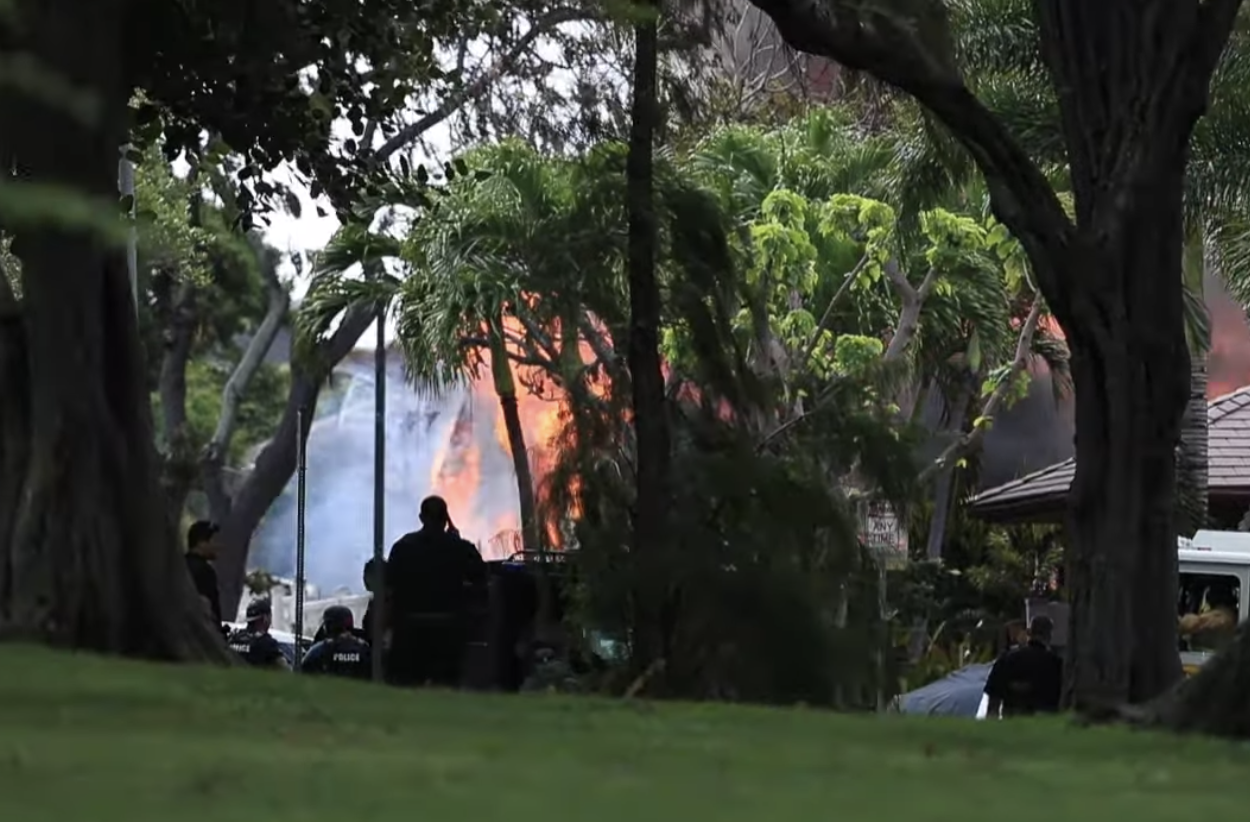 Two Honolulu police officers were shot to death Sunday morning and third wounded when they responded to reports of a stabbing, and within minutes an affluent neighborhood at the base of Diamond Head was ablaze.

Police sources identified the suspect as Jerry Hanel, 69, a man with a history of erratic behavior who reportedly set off the incident by stabbing his landlord when she tried to evict from from the home on Hibiscus Street, Hawaii News Now reported.

He reportedly met the three responding officers with gunfire when they arrived at about 9:30 a.m. and is believed to have set the fire that engulfed the home about 15 minutes later before spreading to more of the neighborhood, KHON reported.

The Honolulu Star Advertiser said at least 12 houses were affected by the fire, with at least four a total loss. Several vehicles, including police vehicles, were also destroyed.

Diamond Head Fire From Above

The view from above showed multiple homes and vehicles destroyed or heavily damaged in the fire that sources believe was deliberately set after a deadly shooting that left 2 Honolulu police officers dead.Video from: Erid CeballosLATEST: https://bit.ly/38n5gVU #HINews #HNN

Authorities believe that Hanel perished in the fire.

Witnesses reported seeing wounded police officers carried out of the house immediately after the shooting. At least one received CPR on the scene before being rushed to Queen’s Medical Center in extremely critical condition. The two officers, one reportedly female, died at the hospital. The third officer was shot in the leg.

The landlord, identified by neighbors as Lois Cain, was taken to the hospital in critical condition. KHON said authorities believe she was attacked with a garden tool.

Honolulu Police Chief Susan Ballard was on scene at the hospital and was seen comforting officers there, as CrimeOnline previously reported.

Honolulu Mayor Kirk Caldwell said the incident was “an unprecedented tragedy” for both Honolulu and the state.

I would like to express my deepest condolences to the family and friends of the two officers as well as the entire Honolulu Police Department. This is an unprecedented tragedy for not only the City and County of Honolulu but the entire state of Hawai’i.

By early afternoon, firefighters appeared to have gained control of the blazes, but earlier, both flames and heavy black smoke were visible for miles, pouring off the spot just blocks from the ocean.

The City and County of Honolulu opened its Emergency Operations Center to provide support for first responders and to assist with those whose homes were affected by the fires, the Star Advertiser said.

The Star Advertiser said that Hanel was scheduled to go on trial on January 27 for misuse of the 911 system, a date that was postponed from October. The alleged crime took place on May 28, and Hanel had pleaded not guilty. The newspaper also said that four different people filed seven separate temporary restraining orders against him between 2014 and 2018. One of those people lived at 3007 Hibiscus Drive. Hanel also asked for two restraining orders in 2018, one against a person living at 3007 Hibiscus Drive.

Hanel’s address is listed as 3015 Hibiscus Drive in the complaint from last May. Neighbors said he had lived in the home about 10 years, according to KHON.