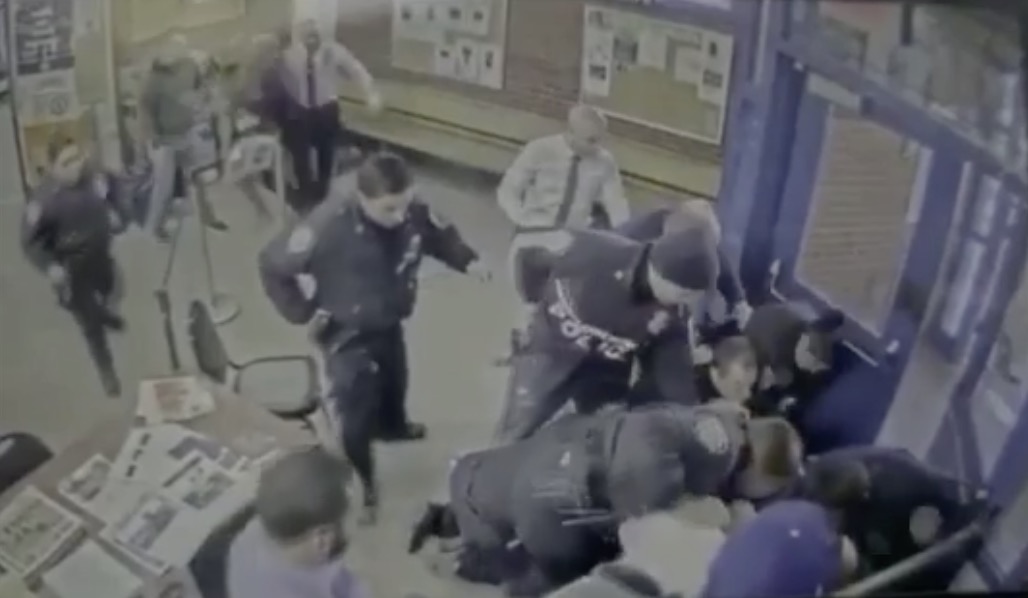 A man out on parole for a 2002 shooting opened fire at a Bronx police station early Sunday morning, wounding one officer before other officers swarmed and detained him, the New York Times reported. Police believe Robert Williams, 44, also attacked two officers sitting in a marked police van in the same neighborhood about 12 …

A man out on parole for a 2002 shooting opened fire at a Bronx police station early Sunday morning, wounding one officer before other officers swarmed and detained him, the New York Times reported.

Police believe Robert Williams, 44, also attacked two officers sitting in a marked police van in the same neighborhood about 12 hours before the station attack, wounding one of those officers as well.

And investigators took Williams’ girlfriend into custody. Liza Valdez is a probationary communications technician with the police department, the New York Post reported.

Video from inside the 41st Precinct house in Hunts Point shows Williams entering at about 8 a.m, wearing a blue and orange jacket with a black hat. He opens fire at a desk area, causing officers to dive for cover, then steps into the room beside the desk and fires toward officers. Within moments, another officer draws his gun, and Williams takes cover in entry room. He obeys orders to lie on the floor and slide his gun away. More than a dozen officers then pile on the prone suspect. Part of the video shows the first officer to confront him punch him as others try to cuff him.

Lt Jose Gautreaux was identified as the officer wounded at the station, as CrimeOnline previously reported. The 15-year veteran was shot in the arm, the Post said, and is expected to make a full recovery.

Police Commissioner Dermot Shea said the first incident took place at about 8:30 p.m. on Saturday, according to the Times. A man approached the two uniformed officers in their van, posted there because of reports of drug dealing and shootings, and asked for directions, he said.

“Without provocation, the man pulls out a gun,” Shea said.

The officers did not return fire, despite multiple shots fired into the van. The officer in the driver’s seat, who was not identified except as an eight-year veteran of the force, was hit in the chin, Shea said.

The commissioner said he is “confident” Williams was the shooter in both instances, but said the 9 mm SIG Sauer weapon police recovered at the precinct house was being tested to see if it was the same one used Saturday night.

“We are speaking to a woman,” he said at a news conference at Lincoln Hospital. “I would not describe her as a suspect.”

Shea appeared with New York Mayor Bill diBlasio, who decried what he said was “too much hatred out there right now,” the Times reported.

Meanwhile, the Sergeants Benevolent Association told de Blasio in a tweet to stay away from the hospital where wounded officers were taken and said the police department was “declaring war on you.”

Mayor DeBlasio, the members of the NYPD are declaring war on you! We do not respect you, DO NOT visit us in hospitals. You sold the NYPD to the vile creatures, the 1% who hate cops but vote for you. NYPD cops have been assassinated because of you. This isn’t over, Game on! https://t.co/XyruPraM9T

Another source told the Post that the police station itself lacks sufficient security.

“There’s supposed to be a cop assigned outside of the precinct to make sure something like this doesn’t happen, especially after what happened yesterday. The department has become too complacent.”

The Times reported that Williams was convicted of attempted murder in 2002, when he shot someone, carjacked a woman to flee the scene, wrecked the car, and got into a shootout with responding officers. He was released on parole in 2017.

The Post said he was arrested in 2018 and charged with DUI and resisting arrest when he was found sleeping in a car near the Major Deegan Expressway. He was held on a parole violation, and released again in January 2019.

His grandmother, Mary Williams, said he was scheduled to appear in court on Monday in that case. Mary Williams said her grandson had stayed clean since his last brush with police but had been depressed and “upset” following the shooting death of his son, Robert Williams Jr., in 2018. No charges were filed in that shooting, which appeared to be an accident.

“He was just upset,” she told the Post. “Sometimes he was very quiet. He’d go sit there and watch TV and he was kind of quiet in his room.