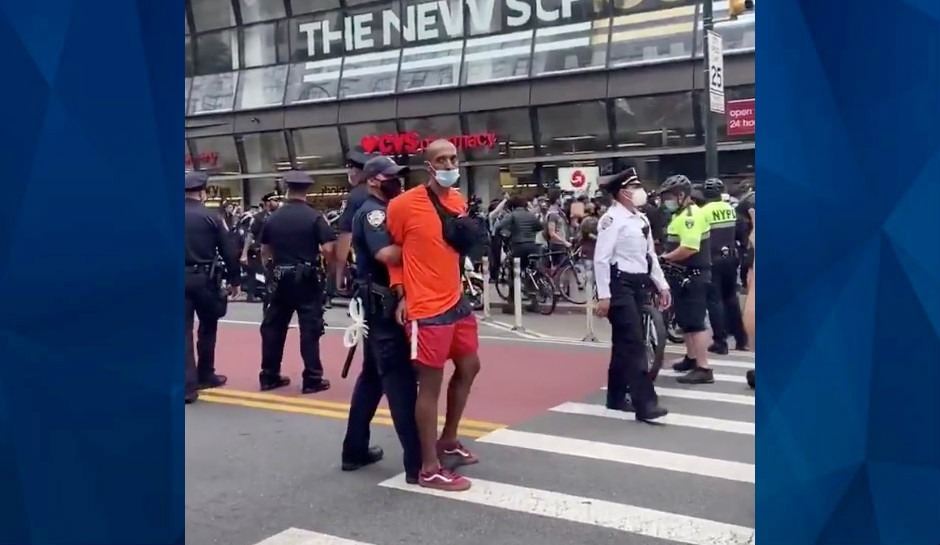 After two nights of protests and riots in Minneapolis over the death of a black man in the custody of police, protests erupted in other parts of the country on Thursday.

With dozens of buildings destroyed or damaged Wednesday night, Minnesota Gov Tim Walz activated the National Guard after Minneapolis Mayor Jacob Frey called for assistance. One person was killed during the protests Wednesday, shot while trying to loot a jewelry store. A man is in custody, the Minneapolis Star-Tribune reported.

In New York, where strict stay-at-home orders are in place because of the coronavirus pandemic, crowds flooded Union Square Thursday afternoon, largely ignoring social distancing guidelines and clashing with police, with at least 30 people arrested, according to the New York Post.

Police in NYC made several arrests during a protest in NYC. pic.twitter.com/P1Qf29Ev1e

The protests began after video showing George Floyd, a 46-year-old Minneapolis man, begging for his life while a police officer held him down with a knee to the neck, as CrimeOnline has reported. Officers were attempting to arrest Floyd after a store called and said he was trying to pass forged documents. The officer, Derek Chauvin, held Floyd face down for seven minutes until he lost consciousness and later died.

union square is arresting peaceful protestors – they are not rioting but these unlawful arrests are giving them a reason to pic.twitter.com/FJbHhuwndk

Protesters in New York chanted “No justice, no peace” and “F– the police” as they marched from Union Square to City Hall. One police officer was injured by a trashcan thrown at him; police arrested a suspect in that case.

There were no arrests in Los Angeles on Wednesday as protesters smashed police car windows and blocked traffic, KTLA said.

“For all of us who lament the death of Mr. Floyd, for all of us whose fathers, whose sons, whose nephews, whose selves that could have been, our demand has to be that we take this energy and channel it towards helping prevent something like that from ever happening again,” Carter said.

The protesters are demanding the arrests of Chauvin and three other officers involved in Floyd’s arrest. All four have been fired, and Frey said Thursday that he believed Chauvin should be charged with murder. But Hennepin County Attorney Mike Freeman said he would not rush any decision and was reviewing evidence.

“If you’re feeling that sadness, that anger, it’s not only understandable, it’s right. It’s a reflection of the truth that our black community has lived,” Frey said during a morning press conference. “We must believe that we can be better than we have been.”

In addition to the National Guard, Minnesota State Patrol officers will be on hand for protests Thursday night. On Wednesday, protests began peacefully but escalated as the evening continued and spread away from the area near the 3rd Precinct — where the officers involved in Floyd’s death worked.

“There was a different tenor last night. There was a core group of people who had really been focused on causing destruction,” said Police Chief Medaria Arrandondo. “We were certainly prepared in terms of (the 3rd Precinct) to provide for safety, but the crowds got larger and they became more mobile.”

Some city officials are concerned about calling in the National Guard, however, worried that that could be an escalation in and of itself. “We need peace and calm in our streets and I am begging you for that calm.” said City Council Vice President Andrea Jenkins, who represents the ward where the Floyd incident took place.

Thursday evening, a very large crowd gathered at the government center in Minneapolis, calling for all four officers’ arrest.