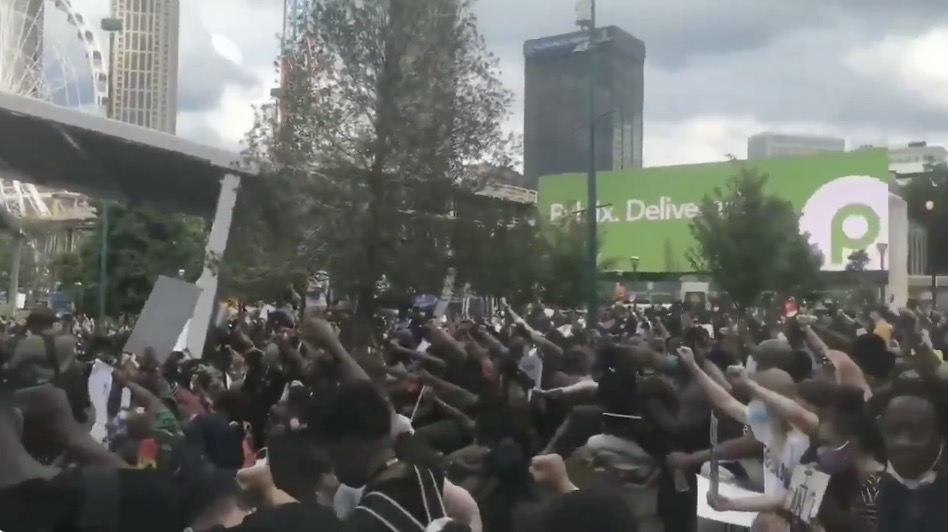 At least one person was killed Friday during fourth night of protests across the country over the killing of George Floyd by a now fired and arrested Minneapolis police officer, as peaceful protests in some areas turned violent after the sun set.

And as states and cities prepared for a fifth night of demonstrations on Saturday, several governors said they were calling in the National Guard or increasing the numbers already on hand to help keep the peace.

Meanwhile, authorities in some cities reported that a majority of arrests were from out-of-state, hinting that at least some of the violence was propagated by people unconcerned with Floyd’s death.

At a noon press briefing in Minneapolis, state officials begged people to abide by an 8 p.m. curfew that was completely ignored on Friday and said they were increasing the number of National Guardsmen on the streets.

“We’re asking for you to let the National Guard have the street after 8 p.m. so that we make sure we can restore order,” Minnesota Attorney General Keith Ellison said, according to MPR News. “We need to be able to stop the burning and the looting and the destruction.”

Lt Gov Peggy Flanagan said that here “heart and guts are being ripped out” because she, too, wants to be on the streets protesting. But “there are white supremacists there,” she said. “There are anarchists. There are people who are burning down institutions that are core to our identity,” she said. “Stay home tonight so that we can remove those folks who are harming us. Remove those folks who are detracting from the memory of George Floyd.”

This is what protests in Minneapolis looked like on Friday, the fourth night of escalating unrest. Watch the full video: https://t.co/2TzFF7j4ZX pic.twitter.com/zpGbfFgp8r

In neighboring St Paul, Mayor Melvin Carter said protests were quieter, but what arrests there were were of people exclusively from out of town.

In Detroit, several hundred protesters began peacefully but turned violent in the evening. Detroit police Chief James Craig said a 21-year-old man was sitting in a car with two other people when someone approached on foot and shot him. Craig said the shooter and all three people in the car fled, but the victim didn’t get very far. He was taken to a hospital where he died, the Detroit News reported. Craig told the News that of 40 arrests, 3/4ths were from out of town.

“It started out peacefully and the vast majority of protesters came here with the best intentions, and I applaud them for wanting to be heard,” Craig said. “But this escalated by a small group.”

For the record the Atlanta protests were peaceful until the cops showed up.

In Atlanta, a peaceful protest eventually moved across downtown toward Centennial Park and to the CNN Center across the street. Protesters sprayed graffiti on the iconic CNN sign outside the building and broke open windows on one side before Atlanta police used tear gas to push them away from the building. Atlanta Mayor Keisha Lance Bottoms, speaking alongside Dr Martin Luther King’s daughter Bernice King and rappers T.I. and Killer Mike, emotionally urged protesters to go home, the Atlanta Journal Constitution reported.

Later in the evening, protesters converged on shopping areas in the affluent Buckhead neighborhood of Atlanta, where shop windows were broken and several high end stores looted. Gov Brian Kemp said he was deploying 1,500 National Guardsmen into the city on Saturday, WSB reported.

In nearly every city, media reported that residents were out in force Saturday morning cleaning up.

“You see these folks not armed with bottles or rocks, but they are armed with brooms”: @jeffpeguescbs highlights people in Minneapolis cleaning up their community following protests https://t.co/0x8tHbwS8f pic.twitter.com/03yK2yaN8C

In north Minneapolis, James Clark watched as firefighters extinguish a blaze that had engulfed a neighborhood barbershop. Clark is the father of Jamar Clark, a black man shot and killed by police in 2015, an incident that sparked weeks of protests in the city. He told the Minneapolis Star-Tribune that the violence is “not solving anything,” but he added that he understands it.

“This has been building up for over 400 years and it just got to the point where it exploded,” he said.