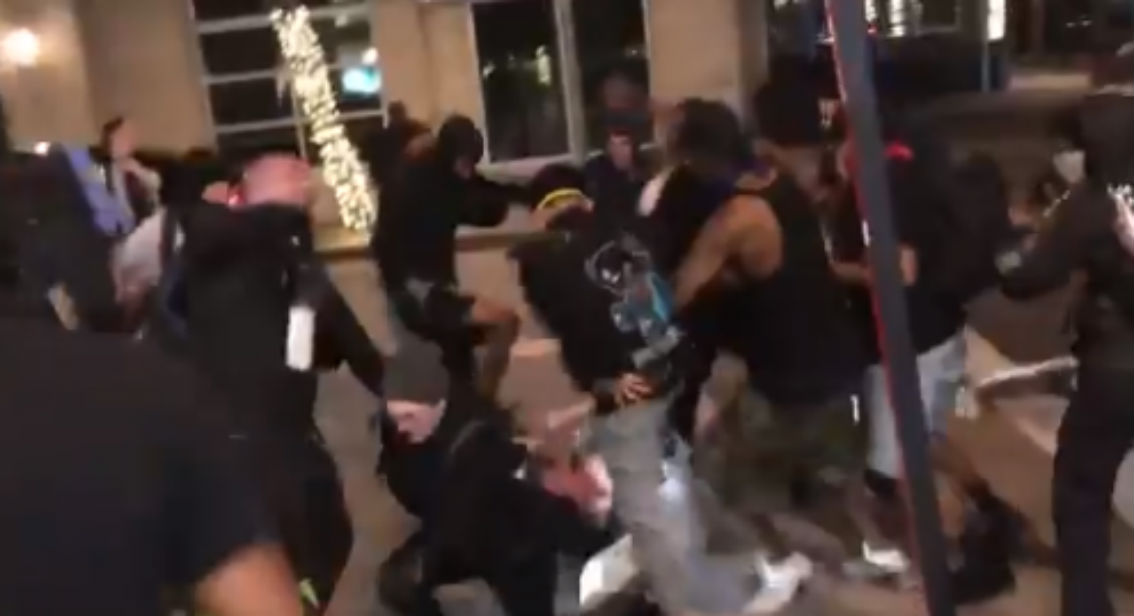 A Dallas-based reporter captured a violent scene at a protest late Saturday night in which a man was injured after he reportedly tried to defend a commercial property from looters.

Elijah Schaffer of Blaze TV first shared video on Twitter of what the reporter said was a man being hit with a skateboard and rocks after he “attempted to defend a shop with a large sword.”

“Looters ran at him, then he charged rioters,” Schaffer said on Twitter, reporting his own observations. “They then beat him with a skateboard and stoned him with medium sized rocks.”

The graphic video shows the man injured and bleeding on the ground.

WARNING: The below videos include disturbing images.

Looters ran at him, then he charged rioters

I called an Ambulance and it’s on the way pic.twitter.com/kFxl3kjsBC

Citing a Dallas police statement, another reporter said on Twitter that the man had been carrying a machete.

"The victim confronted protesters while holding the machete and was subsequently assaulted by the protesters." pic.twitter.com/Vl9Y3X38za

CBS-Dallas Fort Worth reports that the man was taken to the hospital before officers arrived. Schaffer shared a photo on Twitter of volunteers providing medical help to the injured man. The reporter’s tweets initially suggested that the man was critically injured and that his life was possibly in danger, but police sources have said only that he is in stable condition.

Here is the critically injured man being tender to by volunteer medics pic.twitter.com/Jxahufu66B

Full unedited video for editorial requests. Please attribute to Elijah Schaffer of Blaze TV. I cannot confirm he was the store owner, but I pulled out my camera when I saw him appearing to defend a store, then he was rushed, then made the move that might have cost him his life pic.twitter.com/8oGa2obBbp

The investigation is ongoing. CrimeOnline will provide further updates when more information is available.