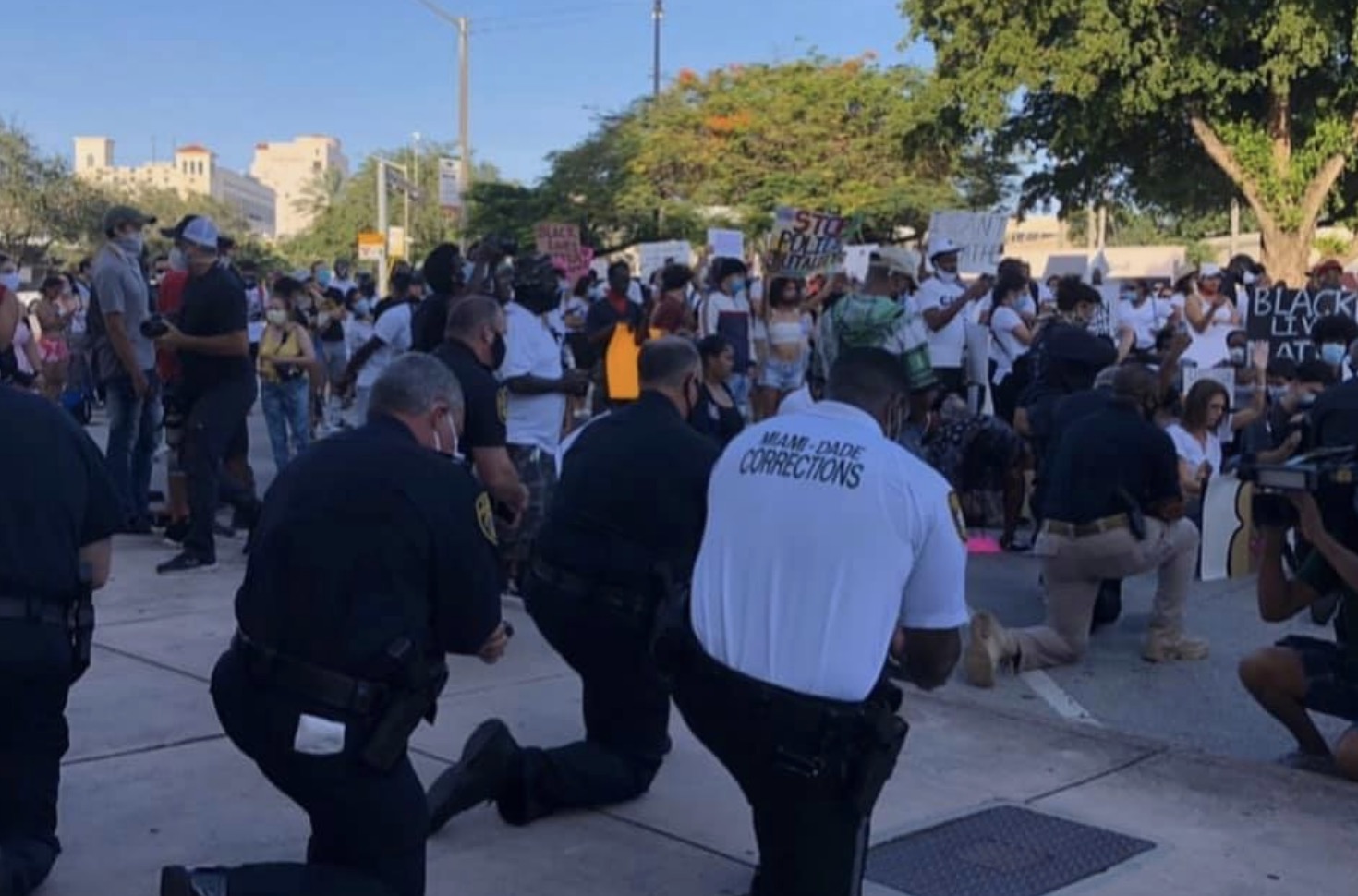 SEE IT: ‘THIS is what de-escalation looks like’: Cops, protesters unite over the killing of George Floyd

As the sun sets on a sixth day of protests over the death of George Floyd in police custody in Minneapolis — and cities across the country brace for a possible sixth night of violence — CrimeOnline found that the week has not been a steady bombardment of police facing off against protesters.

In fact, in several areas, police joined the protesters, tacitly agreeing that a white police officer pressing his knee into a black man’s neck for nearly nine minutes — well after George Floyd had become unresponsive — may well have crossed a line.

Even the newly hired police chief of Ferguson, Missouri — where a white officer shot and killed a black teenager in 2014 and prompted weeks of protests that also turned violent — joined marchers in his city.

Perhaps the first signal that some police officers weren’t about to offer quick support for now-fired and arrested Minneapolis officer Derek Chauvin came from Chattanooga, Tennessee, on Wednesday, when Chief David Roddy tweeted that he didn’t need to wait for more information.

There is no need to see more video. There no need to wait to see how “it plays out”. There is no need to put a knee on someone’s neck for NINE minutes. There IS a need to DO something. If you wear a badge and you don’t have an issue with this…turn it in. pic.twitter.com/frNCAWCeq6

“If you wear a badge and you don’t have an issue with this,” he wrote, “turn it in.”

By the weekend, more had joined in. In Flint, Michigan, Genesee County Sheriff Chris Swanson took off his helmet and put down his baton and spoke to protesters.

“We want to be with y’all for real. I want to make this a parade, not a protest,” Swanson said. “These cops love you. You tell us what you need (us) to do.”

The crowd chanted its reply: “Walk with us.” He did. Other officers joined in.

In Queens, protesters on Jamaica Avenue dropped to one knee to honor Floyd. Loud cheers erupted when they realized police officers had joined them. “THIS is what de-escalation looks like,” acting Queens Borough President Sharon Lee tweeted. ” … We need more of this now.”

In Miami, the entire Miami-Dade County Association of Chiefs of Police joined protesters.

What a touching moment.Yesterday, The Miami-Dade County Association of Chiefs of Police joined protestors condemning…

Posted by Miami-Dade Corrections and Rehabilitation Department on Sunday, May 31, 2020

But perhaps the most inspiring of all was in Ferguson, outside St Louis, where so much anger and heartbreak took to the streets nearly six years ago. A video shows a protest leader calling for a nine minute knee, and as protesters kneel, so too do Ferguson police officers on hand. The crowd cheers.

An HIP intern was filming a protest in Ferguson, MO at the police station when this happened…. As the protest leader called for a 9 1/2 minute knee in honor of George Floyd; Ferguson police of every color also took a knee in joint honor with protest. #WeStandTogether pic.twitter.com/6iN0dMroby

Ferguson Chief Jason Armstrong marched with the protesters for a while, telling the St Louis Post Dispatch that what happened in Ferguson “was a wake up call to law enforcement. It definitely got my attention. It forced me to look at what (police) were doing. It opened my eyes to be a leader, to build that change and build better relationships.”

Peaceful protest happening now in Ferguson. As a show of solidarity the Ferguson Police Chief marched alongside protestors. @KMOV pic.twitter.com/rEXh2rWZOk

Not all of these locations remained peaceful throughout the night. But these moments of solidarity were welcome. Derek Chauvin, the former police officer filmed with his knee on Floyd’s neck, has been fired and charged with third degree murder and second degree manslaughter.