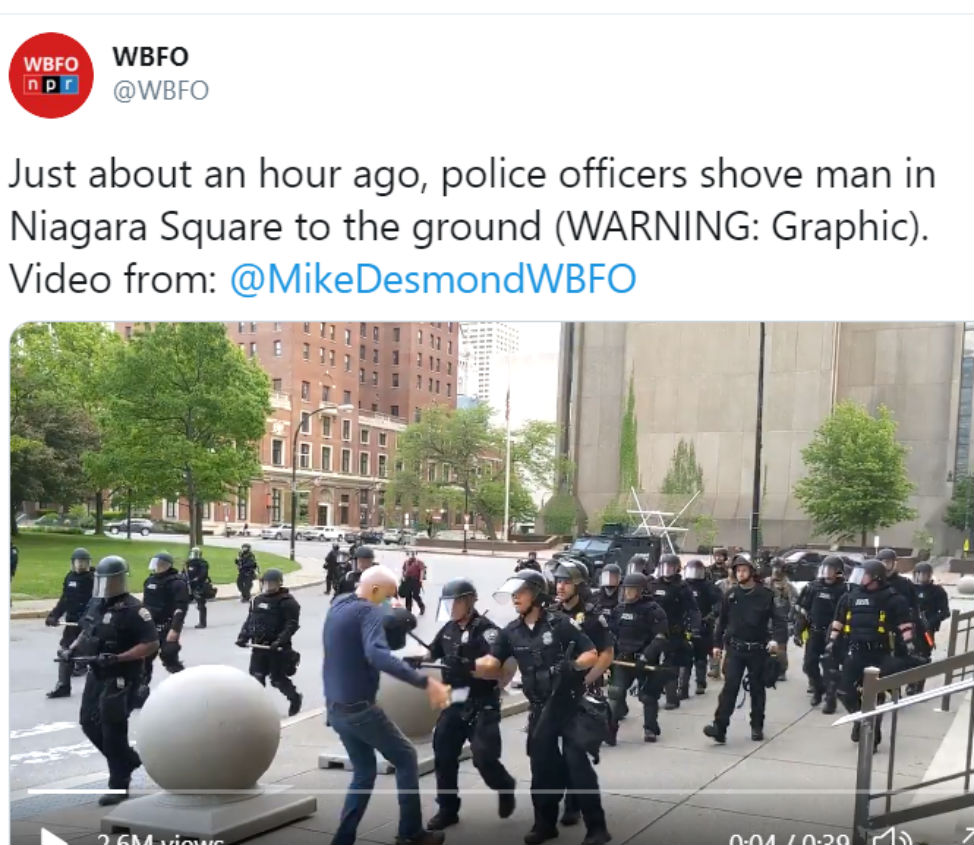 All 57 members of the Buffalo Police Department’s Emergency Response Team have resigned from the unit after two of its members were suspended for shoving a 75-year-old protester to the ground and leaving him there as blood pooled from his head, the president of the city’s police union told the Buffalo News.

As CrimeOnline previously reported, graphic video shows the officers shove the man, identified by Spectrum News as Martin Gugino, causing him to fall backwards. The officer pauses and begins to lean toward him, but another officer pulls him away.

“Our position is these officers were simply following orders from Deputy Police Commissioner Joseph Gramaglia to clear the square,” Buffalo Police Benevolent Association President John Evans told the paper. “It doesn’t specify clear the square of men 50 and under or 15 to 40. They were simply doing their job. I don’t know how much contact was made. He did slip in my estimation. He fell backwards.”

Video shows Gugino approach the line of officers in Buffalo’s Niagara Square and briefly speak with two of them. A third officer approaches between the two, and suddenly the initial two officers push him. He falls backwards, off screen, and when the camera catches up to him, he is lying still on the sidewalk with blood pooling from beneath his head. One of the officers he spoke with leans down, but the third officer pulls him away. The officers continue walking past him without offering aid.

On Thursday evening, the police department suspended two of the officers without pay; it’s not clear which two. The Erie County District Attorney’s Office provided a statement Friday saying it was investigating, and that the injured man had been unable to provide a statement Thursday night. The Buffalo News said he was in serious but stable condition Friday morning.

The 57 officers have resigned only from the tactical unit and not the police force. They did so after the union said it would not pay legal fees to defend officers who run afoul of prosecutors during the protests.

Evans said the union would pay to defend the two officers who have been suspended, saying “We stand behind those officers 100 percent,” but not for members of the Emergency Response Team or SWAT during protests.

Erie County Executive Mark Poloncarz said Friday afternoon he was “exceptionally disappointed” by the resignations “because it indicates to me that they did not see anything wrong with the actions that occurred that night.”

“The video captured on June 4th shows what appears to be a horrific display of abuse and lack of concern for New Yorkers by the Buffalo Police Department,” James said. “My office supports the investigation by the Erie County District Attorney’s Office, and we stand by ready to assist should they need it.”