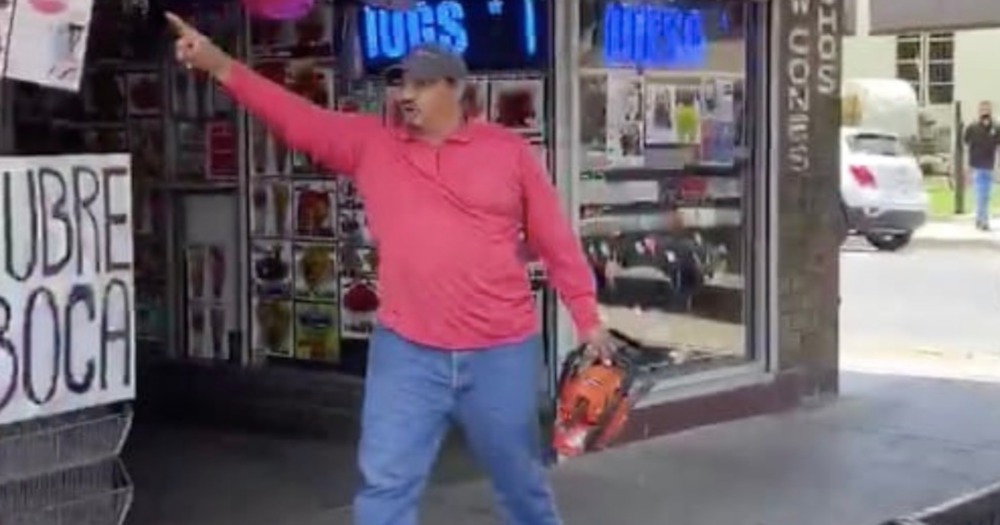 SEE IT: Texas man goes after Black Lives Matter protesters with a chainsaw

UPDATE: The suspect, 44-year-old Daniel Pena, has been charged with four counts deadly conduct and one count of assault and is being held on bonds totally $17,000, the McAllen Monitor reports.

“The ‘chainsaw man’ has been arrested. We will not tolerate such conduct in our City of McAllen,” Mayor Jim Darling said in an online statement. “We apologize to the protesters that were threatened by him. That is not what we do or who we are!”

Texas police have arrested a man who chased Black Lives Matter protesters in McAllen with a chainsaw on Friday, shouting racial slurs and telling the handful of protesters to “Go home.”

KENS5 said that McAllen Police Lt Joel Morales identified the man as Daniel Pena and said he was taken into custody Friday afternoon. Charges against him are pending, Morales said, and Pena has not yet appeared in Hidalgo County jail records.

A Twitter account called @TheHousePlug_ posted video of the incident, which shows the man identified as Pena get out of his truck and head toward the protesters revving his chainsaw.

Lorena Houghton told the McAllen Monitor she was one of a small group of protesters accosted by Pena.

“We were just walking, because we were walking over here by ourselves, it was a group of like six or seven, and we were just trying to cross the street and someone stopped in the middle of the crosswalk and started yelling at the girl in front,” she said.

Houghton said the man tore a poster out of that woman’s hands before grabbing the chainsaw from his truck. In a second video posted to the same Twitter account and shot just before the chainsaw comes out, Pena can be seen and heard shouting at the group, using expletives and racial slurs, while some of them speak calmly to him.

“It’s very scary,” Houghton said. “I think that the exact point they were trying to make is that they didn’t think that Black Lives Matter was necessary here, but I think he disproved his own point by violently attacking people that were walking on the street.”

Morales said no one was injured in the incident, which happened on Main Street at about 2 p.m. He said the police department was well prepared for Friday’s protest.

“This has been the only incident we have seen at today’s peaceful protest,” Morales told Valley Central. “We have identified the individual and detained him, continuing the investigation.”