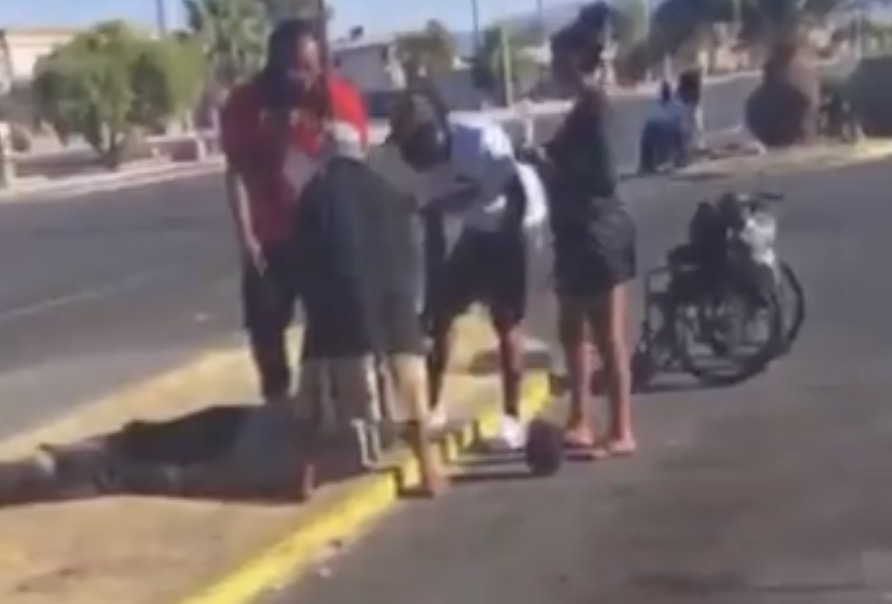 Las Vegas police on Tuesday arrested a man who encouraged a homeless man to do a backflip for $6 last month — livestreaming it in a terrifying video on Facebook as the man lands on his neck and lays motionless on the ground with a broken neck.

Keonte Jones, 28, has been charged with willful disregard of a person’s safety. In the video, Jones films as he and others around him laugh for 10 minutes while other people attend to Comer, who barely moves and cannot sit up on his own.

Jones’s viewers laugh as well, but as Coner stays down longer, more people watching start calling for Jones to attend to him. Instead, Jones keeps laughing, repeatedly flashing the $6 he said he’d give Coner if he landed the backflip, then laughing harder as he says he “landed on his head.”

The incident apparently started, according Las Vegas police, when Coner asked Jones for money. As Jones puts it on the video, he agreed, if Coner would land a backflip. At the beginning of the video, Coner does two cartwheels, and then attempts the backflip, landing hard on his head.

The #LVMPD arrested a man who paid for a dangerous stunt that led to a homeless man’s death. Caution: the video of this incident is disturbing.https://t.co/PxkzfjGpBF pic.twitter.com/qzdiS7ug3P

“He sleep! He sleep,” Jones laughs as he walks toward the prone man. “He hit a backflip and went to sleep.”

“That n****** landed on his neck!” Jones laughs, telling the group not to call an ambulance. “Look at him. Look at him!”

An older woman stays with Coner for much of the video, apparently calling 911. Jones wanders over, still laughing — he never stops — flashes the $6 and says he’d give it to Coner, but the woman would steal it.

At one point, Jones says he’s never seen anything funnier.

Police said Coner was taken to a hospital and underwent surgery but died on June 30. A member of Coner’s family brought the incident to the attention of law enforcement, who launched an investigation.

Jones has been released on bond.