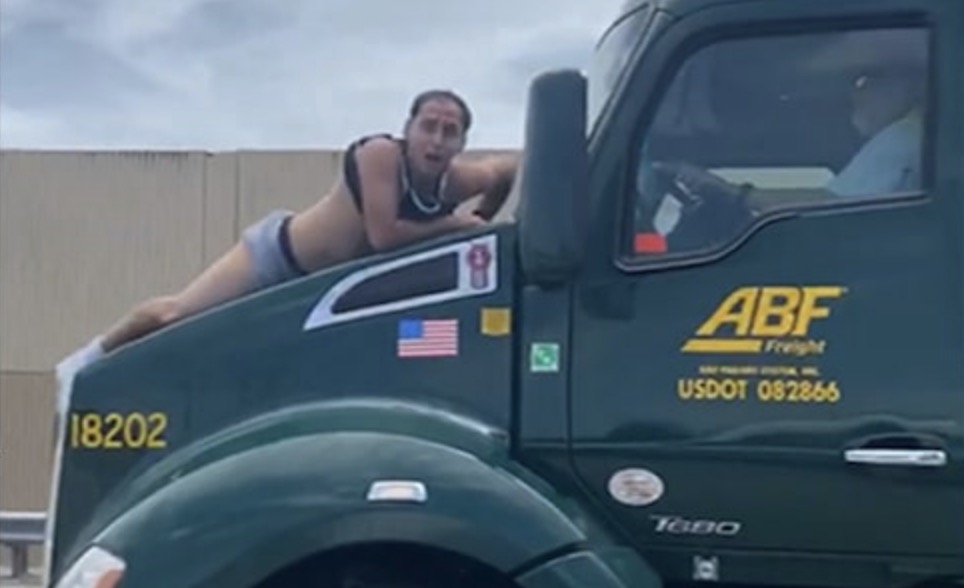 SEE IT: Florida man clings to 18-wheeler’s hood for 9 miles, beating the windshield with his fists

If you were on Florida’s Turnpike north of Miami early Saturday afternoon, you may have seen an unusual — and unusually dangerous — situation: an 18-wheeler barreling down the highway with a man clinging to hood while bashing the windshield with his hands.

The Florida Highway Patrol said the man clung to the truck for nine miles before troopers caught up to them and pulled over the truck, WPTV reported.

The unidentified man was taken to Wellington Regional Hospital for evaluation, and the entire story began to unfold.

FHP told WPTV the man had been driving a white Toyota SUV southbound on the turnpike when, according to his passenger, he began behaving strangely. The man pulled off the highway at the Boynton Beach exit, stopping on the ramp, and got out of the vehicle.

He walked across the highway and hopped over the concrete median onto the northbound lanes and flagged down a trucker. The truck driver, Edward Hughes, told TMZ that he thought the man needed help so he slowed to a stop and was surprised when the man hopped onto his hood and began slamming the windshield. Panicked, Hughes said he hit the gas and drove a little erratically himself, trying to shake him off, and that’s what was captured on cell phone video by Erik Morales.

As Morales drives by, the man can be heard to yell for help. “Call the police,” he shouts.

By the time troopers caught up with them, the truck had gone from mile marker 86 to mile marker 95 — a nine mile journey.

Hughes provided TMZ with photos of his shattered windshield.

The Florida Highway Patrol said the case was still under investigation, and it wasn’t clear if the man or Hughes would face charges.