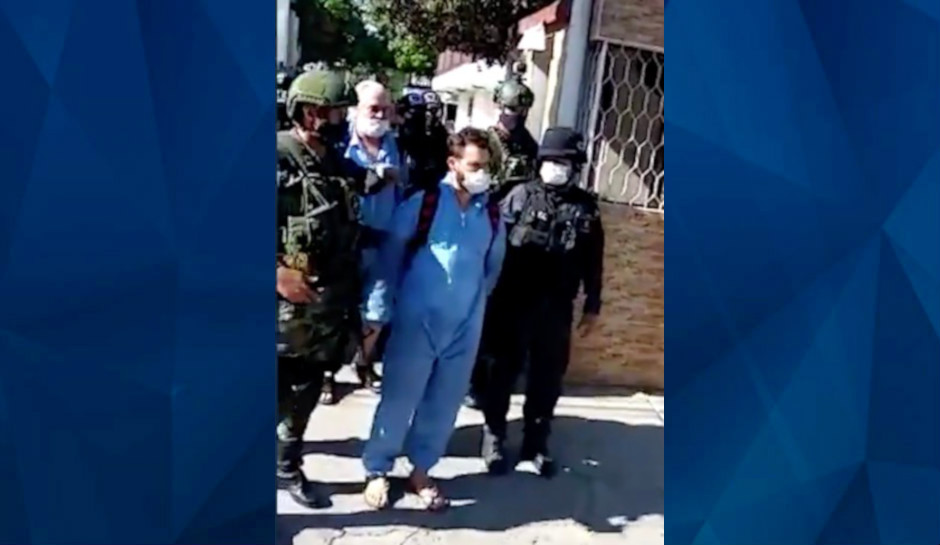 A Florida man and one of his sons were arrested Tuesday in Colombia and now face extradition to the United States, where they’ve been charged with conspiracy and contempt over their manufacture and marketing of an industrial bleach product they claim as a miracle cure for everything from Alzheimer’s to multiple sclerosis, including COVID-19.

Federal prosecutors filed charges against Mark Grenon, 62; Jonathan Grenon, 34; Jordan Grenon, 26; and Joseph Grenon, 32, in early July after they ignored a warning from the Food and Drug Administration to stop promoting their Miracle Mineral Solution (MMS), as CrimeOnline previously reported.

Mark and Joseph Grenon were arrested by Colombian authorities in Santa Marta, the office of the country’s chief prosecutor said. The prosecutor’s office also said that the Grenons had been marketing and shipping their “highly toxic potion” to Europe and Africa from Colombia.

Jordan and Jonathan Grenon were arrested on July 7 when federal agents executed a search warrant on the Genesis II Church of Health and Healing in Bradenton, Florida, operated by the family. Crews seized 50 gallons of muriatic (hydrochloric) acid, 22 gallons of the finished MMS, and 8,300 pounds of sodium chlorite.

The FDA has not approved MMS or anything similar for treatment of anything. The “sacramental kit” marketed by the church — a two ounce bottle of sodium chlorite and water (their MMS) and a two ounce bottle of an “activator” (hydrochloric acid) — when combined becomes “chlorine dioxide, a powerful bleach typically used for industrial water treatment or bleaching textiles, pulp, and paper,” the US Attorney for the Southern District of Florida said in a statement announcing the charges.

Mark Grenon, the self-proclaimed “bishop” of his church, wrote back to the FDA in April, essentially telling they agency they could say whatever they want since they’re a “free church.” “Don’t need you [sic] approval or authorization for a Church Sacrament … There will be NO corrective actions on our part … You have no authority over us! … Never going to happen,” he wrote.

According to the Guardian, the Grenons also wrote to President Donald Trump in April, asking him to promote their product. Days later, Trump suggested looking into injecting bleach into human beings to control coronavirus, the virus that causes COVID-19.

“Is there a way we can do something, by an injection inside or almost a cleaning?” he said.

The criminal complaint filed on July 8 also said the Grenons threatened violence to the judge presiding over the FDA’s civil case against them.

The FDA has been warning about MMS products, sold as Miracle Mineral Supplement, MMS, Chlorine Dioxide Protocol, or Water Purification Solution, since 2010. In 2015, Louis Daniel Smith, who sold an MMS solution through a company called Project GreenLife, was convicted of one count of conspiracy to commit multiple crimes, three counts of introducing misbranded drugs into interstate commerce with intent to defraud or mislead and one count of fraudulently smuggling merchandise into the United States. He was sentenced to more than four years in prison.

Genesis does not sell MMS directly. Instead, it calls its product a “sacrament” and asks for donations.

“Making claims that unproven drugs, especially potentially dangerous and unapproved chlorine dioxide products, can cure or prevent COVID-19 or any other disease is unacceptable,” said Catherine Hermsen, assistant commissioner of the FDA’s Office of Criminal Investigations. “The Genesis II Church of Health and Healing has actively and deliberately placed consumers at risk with their fraudulent Miracle Mineral Solution and Americans expect and deserve medical treatments that have been scientifically proven to be safe and effective.”

The FDA has previously sent warning letters to groups and individuals selling other products as a “cure” for coronavirus, including colloidal silver, teas, and essential oils.