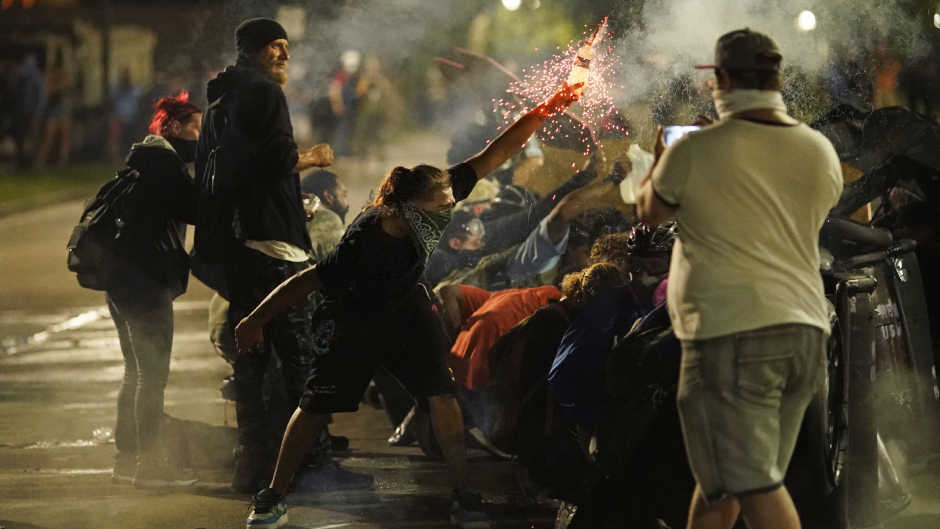 An Illinois teen was arrested Wednesday for fatally shooting two people, and wounding a third, during protests in Wisconsin over the shooting of Jacob Blake.

The Milwaukee Journal-Sentinel reported that Kyle Rittenhouse, 17, was arrested in Lake County, Illinois, as a fugitive from justice. Documents stated that Rittenhouse is facing a first-degree intentional homicide charge in Kenosha County.

Authorities have not yet named the two deceased shooting victims, but they described them as a 26-year-old man from Silver Lake and a 36-year-old man from Kenosha. The Jounal-Sentinel reported that the man shot in the arm was Gaige Grosskreutz, 26, who was protesting in Kenosha with the People’s Revolution Movement, a Milwaukee-based grassroots organization. He’s expected to survive.

Three people were shot early Wednesday, two fatally, during ongoing protests in Wisconsin over the reported police shooting of an unarmed Black man.

The Kenosha Police Department said in a statement that they and supporting agencies responded to the area of 63rd Street and Sheridan Road amid reports of shots fired. The reported shooting resulted in the death of two people; a third shooting victim was rushed to the hospital with serious, but non-life-threatening injuries.

The Milwaukee Journal-Sentinel reported that authorities are looking for a man with a long gun, who is suspected to involved in the shootings. Kenosha County Sheriff David Beth told the news outlet that one victim was shot in the head while another was shot in the chest.

Beth mentioned a video circulating on social media showing someone shot in the arm. While no arrests have been made, Beth said one person will soon be taken into custody based on what was seen in the video.

Beth also told the Journal-Sentinel that a “militia” or “vigilante group” has been patrolling Kenosha in recent days. Beth said it is unclear whether the group is responsible for Wednesday’s shooting. However, The New York Times reported that demonstrators were seen arguing with a group of armed men around the time of the fatal shooting.

Ongoing protests in Kenosha come after Sunday’s shooting of Jacob Blake, 29. A video posted on social media showed police officers shooting Blake in the back multiple times as he leaned into an SUV. Blake’s three sons were in the car at the time of the shooting, according to NPR.

Blake survived the shooting, but his family said Tuesday that he is paralyzed from the waist down.