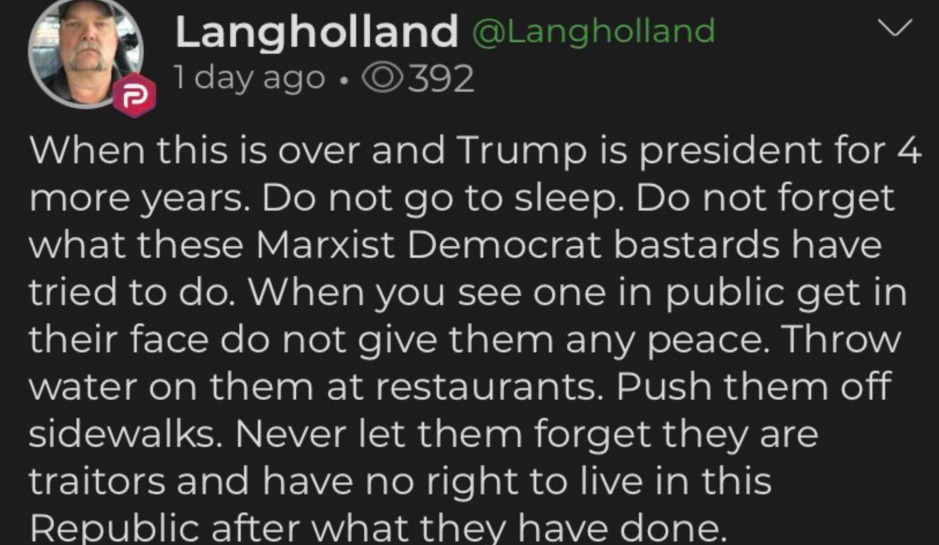 An Arkansas police chief resigned Saturday after a series of social media posts calling for the deaths of “Marxist Democrats” who “have no right to live in this republic,” the Arkansas Democrat Gazette reported.

Lang Holland, who had been chief of police in Marshall for two years, railed against the state of the nation, noting Poland’s recently passed anti-abortion legislation and suggesting he might look into moving there and obtaining citizenship.

“The Poles are a lot smarter than the Marxist Bolshevik Democrats who infest America,” he wrote on the conservative social media site Parler.

Holland backed President Donald Trump’s claims that massive voter fraud cost him re-election, saying those who voted against him were “traitors.”

“Do not forget what these Marxist Democrat bastards have tried to do,” he wrote. “When you see one in public get in their face do not give them peace. Throw water on them at restaurants. Push them off sidewalks. Never let them forget they are traitors and have no right to live in this Republic after what they have done.”

In another post, an image of former President Barack Obama, former Secretary of State Hillary Clinton, House Speaker Nancy Pelosi and others wearing prison jumpsuits was accompanied by his comment praying “all those in that picture hang on the gallows and are drawn and quartered!!!! Anything less is not acceptable.”

(1/n) These are screenshots made from the Parler social media app, posts by Marshall, AR police chief Lang Holland.

“Death to all Marxist Democrats. Take no prisoners leave no survivors!”

Another post encouraged people to burn and destroy the homes of Democrats and run them out of the country, KATV reported. Other posts were critical of Black Lives Matter and trans people. Holland’s account has now been made private and the posts are no longer visible.

Marshall Mayor Kevin Elliott, who appointed Holland chief and confirmed that the chief wrote the posts, said that they were inconsistent with the city’s mission.

“I don’t care who they are — Republican, Democrat or whoever — my Police Department for the city of Marshall is here to protect and serve everybody,” he said.

Elliott said he reviewed the material, then consulted with the Arkansas Municipal League and city attorneys about how to handle the situation.

“I called Mr. Holland in, and he resigned as police chief,” Elliott said, adding that he did not request the resignation.

Holland made headlines in July when he publicly announced he would not abide by Gov Asa Hutchinson’s coronavirus order requiring facemasks.

“I Chief Lang Holland feel this order is a very large overreach of the powers given to the State government by the citizens of the state of Arkansas,” he wrote in a memo posted on the department’s Facebook page, which was disabled in the wake of his Parler posts. “Therefore the Marshall Police Department will take NO enforcement action of any kind this includes arrest or citation by anyone who is not wearing a mask while out in public.”

Holland also refused to wear a mask or require his officers to do so.