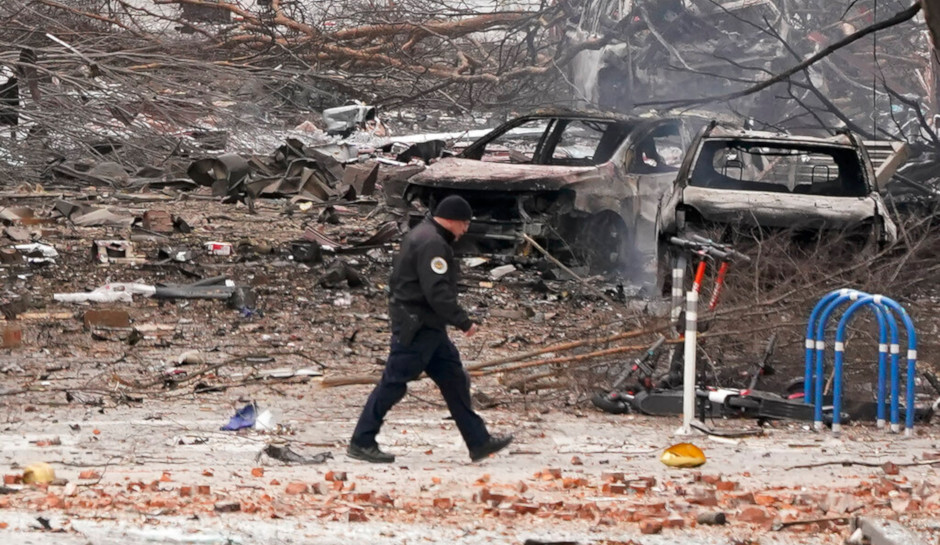 An older recreational vehicle that arrived on a deserted downtown Nashville street early Friday morning exploded hours later, after broadcasting a warning and a 15-minute countdown.

The vehicle was parked next to the central office of an AT&T telephone exchange which also had network equipment inside, and the blast interrupted communications service, the Associated Press reported.

According to Nashville Police Chief John Drake, investigators found “tissue” that “could be” human remains in the area, but no fatalities have been confirmed, The Tennessean reported.

Police said that three people were hospitalized with non-life-threatening injuries, The Tennesseean reported. One police officer was knocked to the ground, and another suffered hearing loss.

As CrimeOnline previously reported, Nashville police said at a morning news conference they believe the explosion was an “intentional act.” Drake called the blast a “total surprise” and said investigators had no known motives by Friday evening.

Police were first called to the scene at 5:30 a.m. when several people living in nearby lofts reported hearing gunfire. Witnesses also said a recording was broadcast from the RV, warning people to evacuate the area and saying there was a bomb inside the vehicle. Responding officers called the bomb squad and began to assist anyone in the area to evacuate, even turning around a dog walker about to head into the area.

At about 6:30, the blast rocked the area, shattering windows and doors and spreading debris along the empty streets and sending black smoke swirling into the morning sky. Along with AT&T phone service in parts of Middle Tennessee, 911 communications in several areas were knocked out and flights out of Nashville International Airport were grounded because of the communications issues.

BREAKING: This is the RV that exploded on 2nd Ave N this morning. It arrived on 2nd Ave at 1:22 a.m. Have you seen this vehicle in our area or do you have information about it? Please contact us via Crime Stoppers at 615-742-7463 or online via https://t.co/dVGS7o0m4v. @ATFHQ pic.twitter.com/JNx9sDinAH

Nashville police tweeted out a photo of the vehicle believed to be the one that exploded, saying it arrived on 2nd Avenue at 1:22 a.m.

Michael Smalley, executive vice president of Cruise America, an RV rental firm, said that the vehicle looks to be about 10 years old and is unlikely to have been rented out by a company. He added that the vehicles age might be very helpful for tracing its owner because there are few vehicles like it on the roads and it’s “conspicuous.”

As the investigation continued throughout the day, The Tennesseean reported that several people were taken in for questioning, but authorities would not provide details. Several state and federal agencies joined the investigation, and although investigators said there was no indication of any other devices, police with bomb-sniffing dogs went door-to-door downtown to check.

Nashville Mayor John Cooper issued a state of civil emergency at the explosion site and the surrounding area, putting in place a curfew in that area from Friday at 4:30 p.m. until Sunday 4:30 p.m. He said at least 41 businesses in the area had some damage from the explosion.