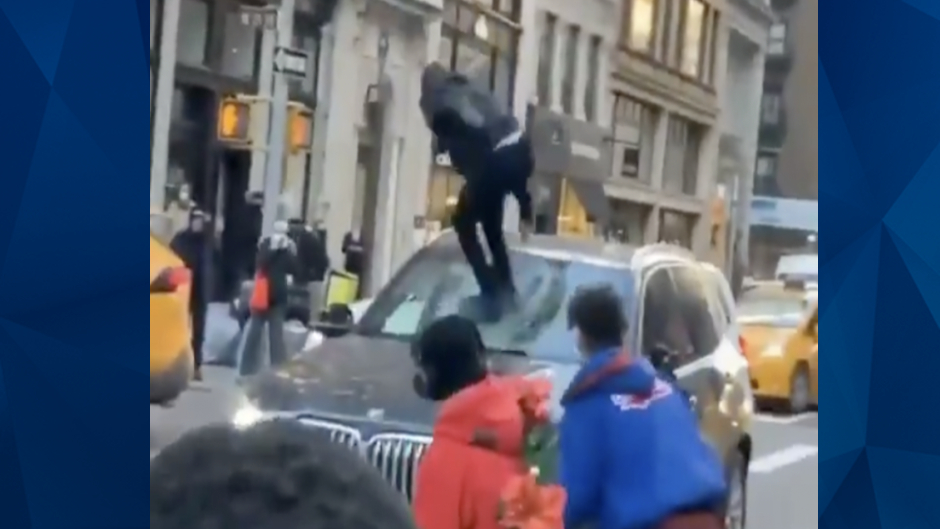 A 15-year-old New York boy was arrested Wednesday, a day after he and a group of teens vandalized a car containing two people on a busy street.

The New York Daily News reported that teens on bikes surrounded the BMW on Fifth Ave. near 21st St. in New York City. Witnesses reportedly claimed the suspects were angry when one of the teens grabbed the moving car’s door handle, presumably to get a ride, and fell.

The driver, Max Torgovnick, 36, told the news outlet that he saw the bicyclists approach his car as he and his 74-year-old mother were going to drop off donations at a thrift store. He recalled slowing down the car in an attempt to let the teens pass, but he was unaware one of them was holding on to his car, causing the crash.

Daniel Winarick, who posted footage of the ordeal to Twitter, said the teen who crashed suffered a bloody lip.

East 20s, #Manhattan, New York, earlier today. ~25 – 50 mixed-age teenagers on BMX bicycles descend onto the streets. Two grab onto a car driving by to catch a ride. The driver breaks & 1 of the bikers crashes into something, resulting in a bloody lip. Next is below. #FundPolice pic.twitter.com/qXowgJG9S4

Torgovinick said he heard a thud but he initially believed it was someone striking his car out of anger. Moments later, the teens surrounded the car and began punching out the windows and ripping off the side mirrors, the Daily News reported.

After one of the suspects smashes the windshield, Torgovnick said he “saw an opening” and drove a block away to safety.

“Having to hear my mother scream into that phone, ’We are going to die! They are going to kill us!’ is something that is still sitting with me,” he told the news outlet. “We’re both traumatized.”

The unidentified teen was charged with rioting and criminal mischief. Police are looking for the other suspects involved in Tuesday’s incident, according to WCBS.