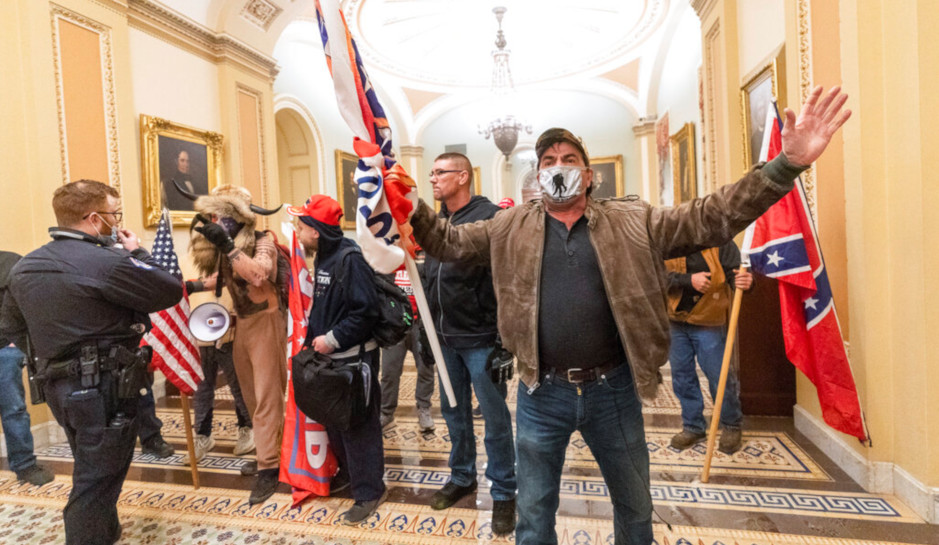 The House of Representatives sergeant at arms told reporters and members of Congress at about 5:30 p.m. Wednesday that the Capitol complex had been secure, but it remained unclear if the venerable building was safe after pro-Trump rioters broke into the building during the counting of the electoral college votes.

NBC News reported that the FBI was investigating explosives found on the grounds of the Capitol, but no details were released. Suspected bombs were found near the headquarters of both the Republican National Committee and the Democratic National Committee in downtown Washington, the Washington Post said, but it wasn’t clear if that was the same report as NBC’s.

MSNBC reported that the Senate would resume consideration of objections to the Arizona ballots at 8 p.m., and that the joint session counting the ballots would resume after the chamber votes on the objection.

Former Vice President Joe Biden won the presidential election in November, topping Trump by some 7 million votes in the popular vote and 306-232 in the electoral college. Each of the states has already certified their votes — Trump’s challenges have lost 60 times in court — and Wednesday’s activity is a ceremonial act to open the ballots from the states and count them. Senators and representatives have the right to object to a state’s electoral votes, and if at least one from each body does so, the bodies retire to their respective chambers and debate for two hours, then vote. Both chambers must vote in favor of the objections in order to reject the ballots.

When the rioters broke into the Capitol, the House and the Senate were debating objections to Arizona’s electoral votes.

Shortly before, President Donald Trump took to a stage in front of his supporters at about noon on Wednesday, ahead of the 1 p.m. start of the certification process, overseen by Vice President Mike Pence. Continuing to press his baseless arguments that the election was stolen from him, the president encouraged the crowd “to walk down there … to the Capitol, and we are going to cheer on our brave senators and congressmen and women.”

“And we’re probably not going to be cheering so much for some of them,” he said. “Because you’ll never take back our country with weakness. You have to show strength, and you have to be strong.”

Trump’s attorney, Rudy Giuliani, also spoke at the rally, telling the supporters that a plan to have Pence refuse to certify the ballots — which he does not have the authority to do, according to the Constitution — “perfectly legal … it is perfectly appropriate given the questionable constitutionality of the Election Counting Act of 1887 that the vice president can cast it aside.”

"Over the next 10 days, we get to see the machines that are crooked, the ballots that are fraudulent. And if we're wrong, we will be made fools of. But if we're right, and lot of them will go to jail. So — let's have trial by combat" — Giuliani pic.twitter.com/QAYvnplCj7

Giuliani went on to call for “trial by combat.”

When the protestors arrived at the Capitol, they broke through police barricades, climbed Capitol walls, and fought with police until they reached the doors. For an hour, the Washington Post said, they banged on the doors shouting “Let us in!” while police fired smoke bombs a pepper balls, to no avail. Then, the rioters began to break windows and climb into the building.

A Capitol Police officer shot a woman inside who later died, the Post said. She was apparently among a group who disobeyed police orders to stop and instead continued to rush at the officers.

Rioters swarmed the building, heading filling the Rotunda and flooding toward the House and Senate chambers. Capitol police began to take officials and staff to safe areas, but at one point, about 15 House members were trapped in the chamber for about 15 minutes, Rep. Jason Crow, D-Colorado told the Denver Post. Officers eventually cleared all the the officials out of the chamber, but rioters swept through the Capital, ransacking offices and spreading debris in the halls and elevators.

DC Mayor Muriel Bowser set a 6 p.m. curfew for the area, but rioters still roamed the area well after that time, MSNBC reported.

Meanwhile, current and former officials, both Democratic and Republican, condemned the violent takeover the US Capitol. While Trump initially tweeted only calling for rioters to avoid violence, he eventually released a video in which he said he loved them, that he understood them because he’s been treated badly and had the election stolen from him, but they should go home peacefully. Twitter locked the president’s account for 12 hours, citing the three tweets and saying the account would remain locked until they are removed.