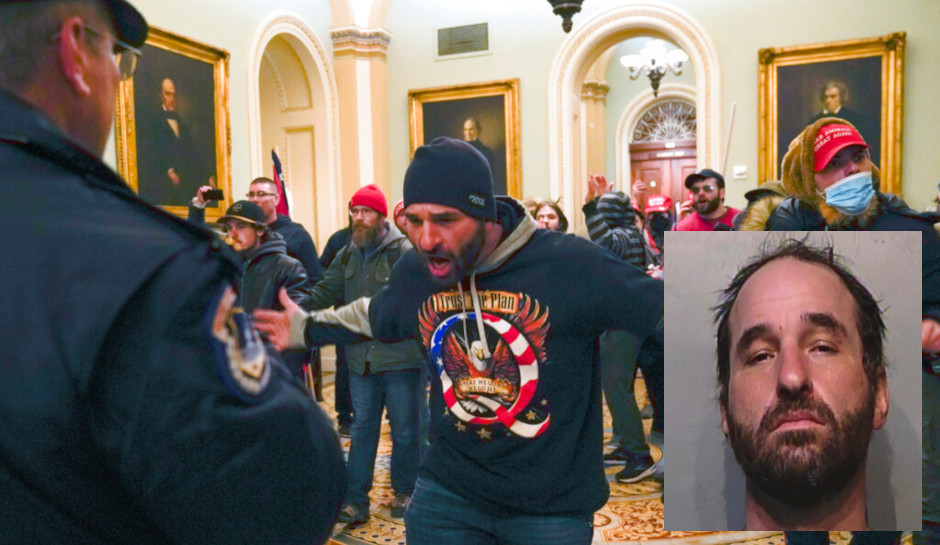 A pro-Trump rioter seen in video at the head of a mob chasing a lone policeman up the stairs of the US Capitol on Wednesday has been arrested and charged with federal crimes, the Des Moines Register reports.

Doug Jensen, 41, posted a photograph of himself inside the Capitol, wearing the same QAnon shirt he’s seen wearing in the video with the caption, “You like my shirt?”

The harrowing video was taken by Huffington Post reporter Igor Bobic, who was caught in the building with the others when the mob broke in and began trying to reach the Senate and House chambers, where lawmakers were counting Electoral College votes.

Bobic said the video showed the group of rioters heading toward the Senate chamber. The police officer repeatedly tells them to stop and reports his position on his radio as he flees up the stairs, until he reaches a hallway and the relative safety of other officers.

Here’s the scary moment when protesters initially got into the building from the first floor and made their way outside Senate chamber. pic.twitter.com/CfVIBsgywK

Five people, including a US Capitol Police officer, died in the violent takeover of the Capitol on Wednesday, which began after Donald Trump spoke to protesters, telling them with no evidence that the election had been stolen from him and urging them to march on the Capitol where the vote counting was taking place.