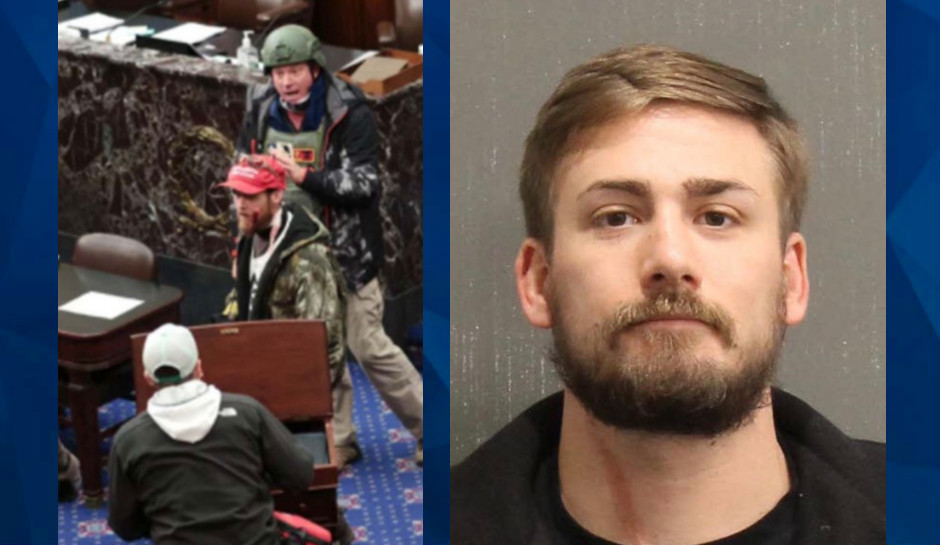 Federal authorities charged two men photographed with plastic zip tie handcuffs during Wednesday’s violent takeover of the US Capitol by a pro-Trump mob.

Larry Rendell Brock and Eric Gavelek Munchel were each charged with one count of knowingly entering or remaining in a restricted building without authority and one count of violent entry and disorderly conduct on Capitol grounds.

The US Attorney’s Office for the District of Columbia said that both were taken into custody on Sunday, Brock in Texas and Munchel in Tennessee.

Authorities say Brock was photographed in a green helmet, green tactical vest with patches, black and camouflage jacket, and beige pants with flex cuffs attached. Munchel was photographed, the office says, carrying plastic restraints, a holster with something in it on his right hip, and a cell phone mounted on his chest with the camera facing outward.

The photos of Brock and Munchel were among several posted by the FBI asking for information.

Brock, 53, was fired from his job at Hillwood Airways in Fort Worth after he confirmed to the New Yorker that the photographs did show him on the floor of the Senate chambers, NBC DFW reported. The FBI said Brock turned himself in to Grapevine police.

Social media sleuths identified Munchel, beginning by noticing a Tennessee “thin blue line” patch he was wearing, News Channel 5 reported. He was photographed leaping over a railing with several flex cuffs in his hand. The identification led to videos he livestreamed on Facebook at the rally and during his march to the Capitol, discussing with others how they might get into the building. Munchel later disabled his Facebook page.

Social media did an incredible job of piecing together the clues, beginning with the Getty images pic, leading eventually to Munchel’s FB page. pic.twitter.com/pYic0NwyDO

Another video, livestreamed after the riot, shows Munchel in the lobby of a hotel, the station says. The livestreamer notes his empty holster.

“It’s just a Taser, but the police came and took it away from me,” Munchel said. “They didn’t like it because of tonight. They said I couldn’t open carry a Taser.”

He also described himself as “a hidden patriot ready to jump off.”

The flex cuffs the two men were carrying led some observers to speculate they may have intended to take hostages, although there has so far been no evidence presented of that.