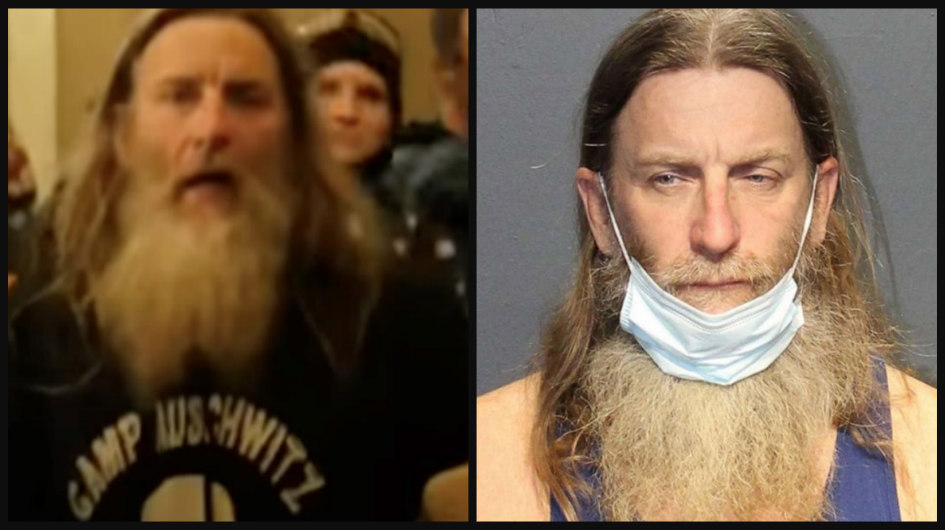 A pro-Trump rioter who allegedly took part in storming the Capitol on January 6 has been arrested and identified as Robert Keith Packer of Virginia.

Sources who spoke to CNN said that Packer is an “extremist” who had prior issues with law enforcement. One source said Packer was frustrated with the government, while another source said he worked as a welder and pipe-fitter in the past.

“He’s been always extreme and very vocal about his beliefs,” a source told the outlet.

Packer was captured on camera several times at the Capitol. He was wearing a controversial shirt with a skull and crossbones, and the words “Camp Auschwitz” and “Works Brings Freedom” on the front. The back of the shirt read,” Staff.”

Trump:
“We love you, you’re very special. Particularly the ones with the cable ties for hostages and the ‘Camp Auschwitz’ and ‘6 Million Wasn’t Enough’ T-shirts and the racist flag”#terroristsnotprotestors pic.twitter.com/9B5uUqSxcI

“Work brings freedom” is an English translation of the German phrase “Arbeit Macht Frei,” which was displayed at the entrance of a Nazi concentration camp, according to PBS.

“Someone not only wore this sweatshirt, but some company made it. We historians have a lot of work to do, it seems,” medical historian Dr. Lindsey Fitzharris wrote on Twitter.

Someone not only wore this sweatshirt, but some company made it. We historians have a lot of work to do, it seems.

Let's start with this: follow @AuschwitzMuseum. Read their stories about those who died in the Holocaust. Learn about the past. Learn *from* the past. pic.twitter.com/k22IPzb9Et

According to Newsweek, at least two companies, TeeChip and Amazon, have since removed the Auschwitz-related clothing.

“All sellers must follow our selling guidelines and those who do not will be subject to action including potential removal of their account,” an Amazon spokesperson said to Newsweek. “These products have been removed.”

Packer is currently at the Western Tidewater Regional Jail in Suffolk, Virginia. He’s scheduled to make a court appearance on Wednesday afternoon.