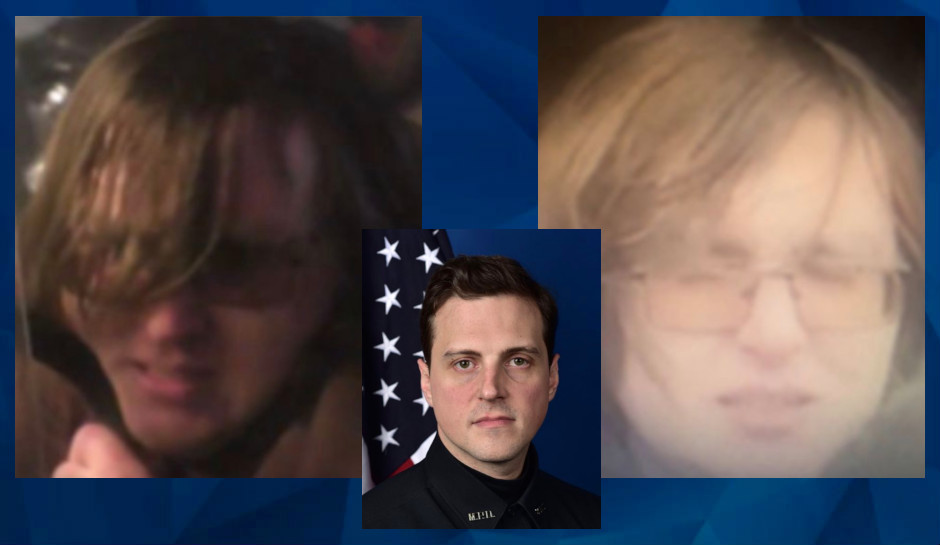 Officer Daniel Hodges is recovering, police said after 10-year-old Emma tweeted him a get well card.

DC police released images Friday of a suspect seen in a dramatic video pinning a police officer against a door jamb during last week’s deadly attack on the US Capitol by a violent, pro-Trump mob.

The shocking video shows the suspect using a riot shield to pin Officer Daniel Hodges against the door as he screams in pain.

Earlier this week, Metro police identified the officer for the first time in response to a heartfelt letter tweeted at the department by a 10-year-old girl.

Officer Daniel Hodges spoke with Emma Joblonski via Zoom, NBC Washington reported, and the department tweeted that Hodges was “recovering and doing well.”

Hi Emma – thanks for sharing your card! Just wanted to let you know Officer Hodges is recovering and doing well. Thank you for the kind words! We’ll DM you an address of where to send it! @JohnnaJablonski https://t.co/rzByMALqPF

The video, taken by freelance photographer Jon Farina, shows a crowed of rioters pushing their way into the building as officers tell them to go home, as CrimeOnline reported. At one point, as the crowd surges forward, Hodges is pinned between the riot shield and a door, crying out with blood on his face.

You’ve seen images of Ofc Hodges crushed in the doorway during the insurrection at the US Capitol. Now we need your help finding the suspect who used a police shield to pin him against the door jam.
Have info? Call the FBI’s Tipline at 1-800-CALL-FBI (1-800-225-5324) @FBIWFO pic.twitter.com/AZt2lylfj9

Earlier in the video, a protester is seen pulling on the gas mask worn by an officer in the same area, before the camera briefly cuts away. The number on the helmet indicates that it was Hodges, who wass not wearing the mask later in the video, suggesting that it was pulled all the way off.

Five people, including a Capitol police officer, were killed in the deadly insurrection.