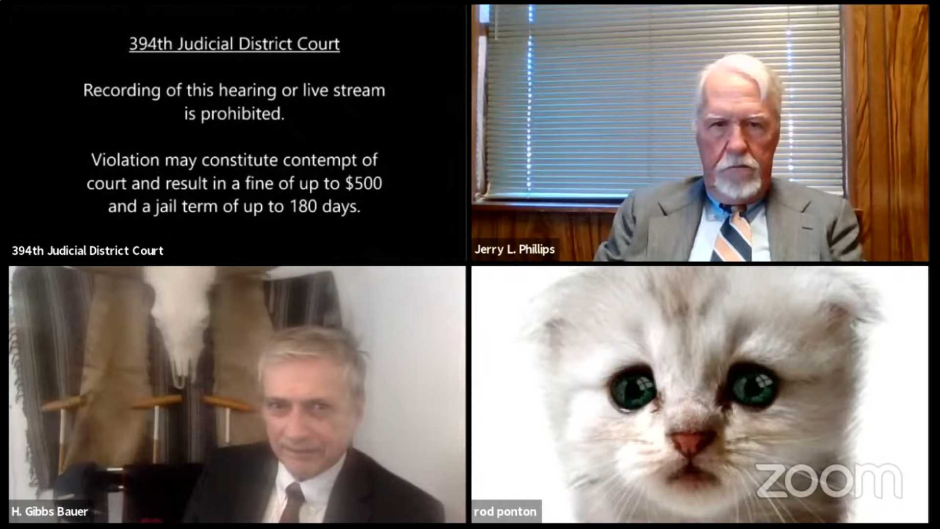 Virtual court proceedings were briefly delayed on Tuesday by a lawyer who apparently had trouble with a cat filter that was superimposed onto his face.

Attorney Rod Ponton told VICE that he was unaware that the 349th District Court of Texas released the now-viral footage of his gaffe. Ponton said his secretary is to blame for the cat filter as he was using her computer at the time.

During the 42-second clip, Judge Roy Ferguson is heard off-camera informing Ponton of the filter obscuring his face. Evidently confused, Ponton then asks the judge if he can hear him.

“I can hear you,” Judge Ferguson responds. “I think it’s a filter.”

“It is and I don’t know how to remove it, I’ve got my assistant here and she’s trying to but uh … I’m prepared to go forward with it,” Ponton says.

Ferguson responds, “I can see that,” before providing Ponton with instructions on how to disable the distracting filter.

Ponton told VICE that the case involved a man who attempted to leave the U.S. with contraband. He said he managed to get the filter on his face and proceed with the hearing as normal.

Ponton expressed concern about the video being public because his name is visible in the video. However, Judge Ferguson tweeted that the footage was released for educational purposes, not to shame the lawyer.

“These fun moments are a by-product of the legal profession’s dedication to ensuring that the justice system continues to function in these tough times,” he wrote.

“Everyone involved handled it with dignity, and the filtered lawyer showed incredible grace. True professionalism all around!”