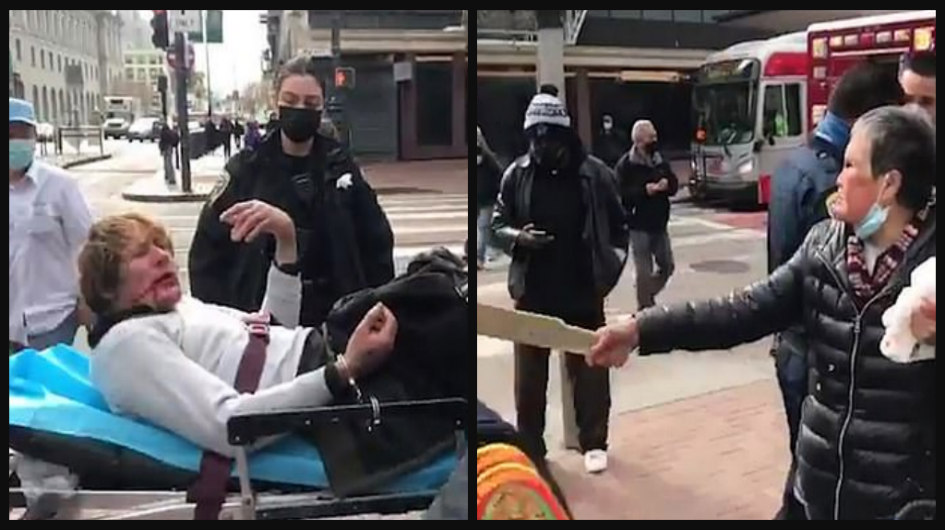 SEE IT: 76-year-old Asian woman beats man with a stick, sends him to hospital after he randomly face punches her

An elderly California woman who was attacked on Market St. in San Francisco Wednesday opened up about defending herself against an assailant, which left him in the hospital.

CBS SF BayArea reports that Xiao Zhen Xie, 76, said she was standing on a sidewalk, waiting at a traffic light at Market Street and Charles J. Brenham Place at around 10:30 a.m. Wednesday, when a random man approached her and punched her in the face.

Xie immediately defended herself. She found a  stick and struck back at the man, according to her daughter, Dong-Mei Li.

“She found the stick around the area and fought back,” Li told the outlet.

Xie, who speaks Cantonese, had Li translate her version of what happened on the day in question.

“Very traumatized, very scared and this eye is still bleeding,” Li said. “The right eye still cannot see anything and still bleeding and we have something to absorb the bleeding.”

Video footage from the scene showed Xie still holding a stick while the suspect, identified only as a 39-year-old man, was strapped to a gurney with a bloodied mouth. Witnesses at the scene told CBS SF BayArea that Xie “pummeled” the alleged attacker “with a paddle.”

Just came upon an attack on an elderly Asian woman on Market Street San Francisco. Effort I got more details pic.twitter.com/5o8r0eeHE2

“You bum, why did you bully me?’ and ‘He hit me, he hit me!” Xie screamed in Cantonese at the suspect.

The San Francisco Police Department said the suspect has not been named yet since the investigation is ongoing and he hasn’t yet been charged. They’re also trying to determine if the incident is a hate crime.

Meanwhile, Xi’s family started a GoFundMe page for funds to help out with medical expenses.

“Her wrist has also swelled up. She has been severely affected mentally, physically, and emotionally. She also stated that she is afraid to step out of her home from now on,” Xi’s grandson wrote on GoFundMe.

“This traumatic event has left her with PTSD. Although she has health insurance that covers the basics, there are still many medical expenses that cannot be covered on her own. She is a cancer survivor and she also has had diabetes for over 10 years now.”