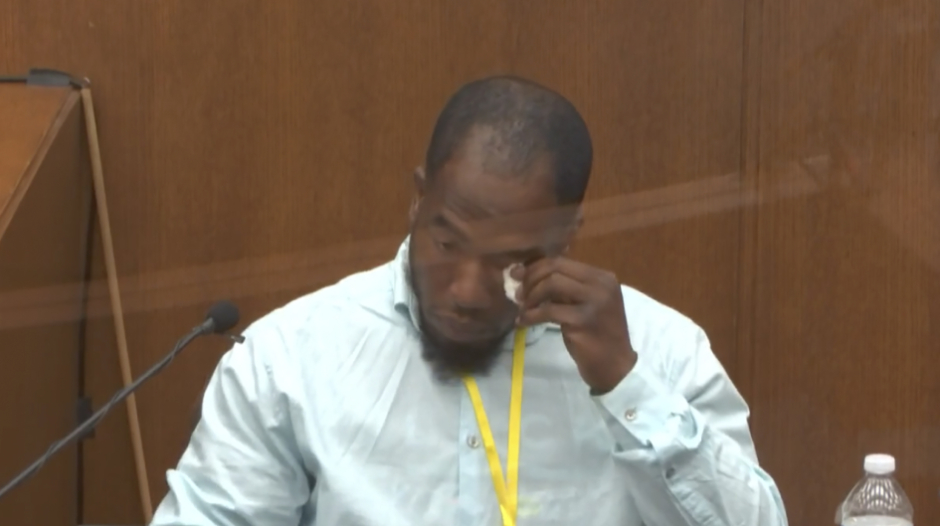 ‘I believe I witnessed a murder’: MMA fighter witness says he ‘called the police on police’ after George Floyd’s slaying

A witness testified on Tuesday that he called 911 to report the actions of then-Minneapolis police officer Derek Chauvin after he watched him kneel on George Floyd’s neck.

Donald Williams II, the MMA-trained fighter who on Monday testified that Chauvin had used a “blood choke” on Floyd, became visibly emotional as the court listened to the 911 he placed following the fatal incident. Williams said on the stand that he “called the police on the police” as he “believe[d] he witnessed a murder.”

“You could see he was in tremendous pain,” Williams said of Floyd during his testimony, according to Fox News. “You could see that he was trying to gasp for air, and trying to be able to breathe as he’s down there. Trying to move his face side to side to…I’m assuming, gasp for more air.”

Donald Williams II, a bystander who yelled repeatedly for Chauvin to remove his knee from Floyd's neck, says “I did call the police on the police” when he saw George Floyd killing.

"I believe I witnessed a murder." pic.twitter.com/AQTDO7p6Nc

Williams reportedly told the 911 dispatcher that then-Minneapolis police officer Chauvin kept his knee on Floyd’s neck even as Floyd was handcuffed and was not resisting arrest. Williams is also heard during the phone call declaring the police officers were “murderers.”

Conversely, lead defense attorney Eric Nelson questioned Williams about his use of language and demeanor during Floyd’s arrest. At one point, Nelson Williams whether he called Chauvin “bums” in addition to other expletives.

On Monday, the defense argued that an unruly — and purportedly threatening — crowd prevented responding officers from tending to Floyd during the May 2020 arrest that ended with his death.

“I stayed in my body. You can’t paint me out to be angry,” Williams told Nelson during a contentious exchange.

While Hennepin County’s autopsy report stated that there was no evidence “to support a diagnosis of traumatic asphyxia or strangulation,” an independent autopsy asserted that sustained forceful pressure on Floyd’s neck and back led to his death. Both reports mentioned drugs in Floyd’s system but concluded his death was a homicide.