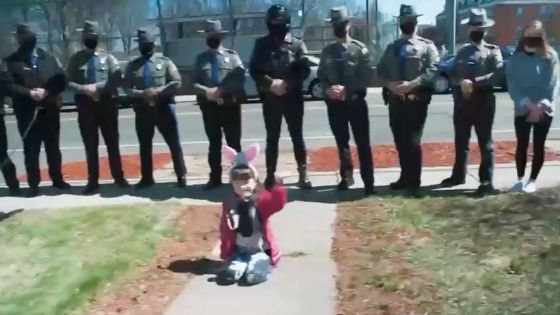 SEE VIDEO: THE EASTER BUNNY WORE A BADGE! Troopers give little girl who lost both her parents an Easter surprise

The state police of three New England states joined together on Saturday to make a special delivery to a young girl who lost both of her parents a few months ago in separate incidents. Eyvie’s gifts started in New Hampshire, where state troopers carried the packages to the Massachusetts state line, where state police there took over and drove to the Connecticut state line.

Thank you to our partners at Massachusetts State Police and Connecticut State Police for joining forces with #NHSP to bring #Easter goodies to Eyvie who lost both of her parents. 🚔 pic.twitter.com/gqcmJyhchB

Connecticut State Troopers made the final leg of the journey and presented the gifts to a very surprised little girl.