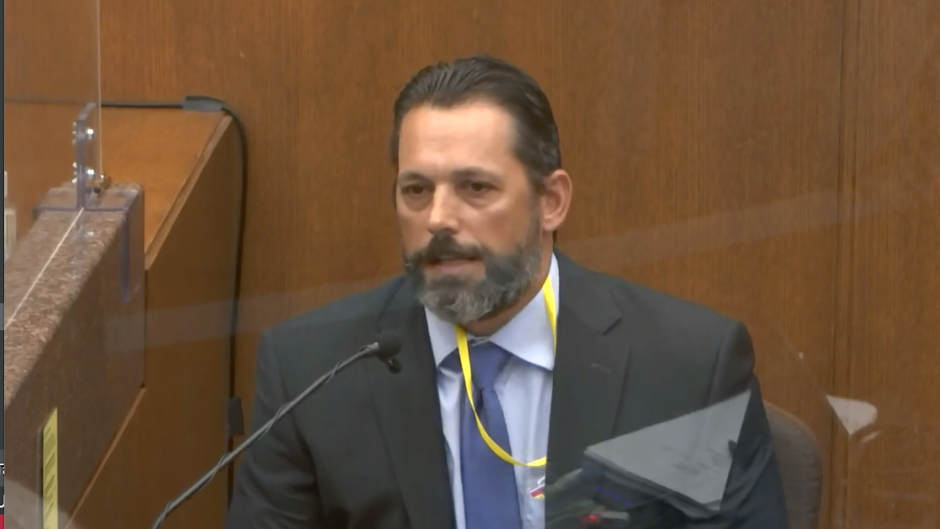 A high-ranking Minneapolis police official testified on Tuesday that officers are specifically trained to avoid neck pressure and that Derek Chauvin kneeling on George Floyd’s was not a department-approved tactic.

Minneapolis police lieutenant Johnny Mercil — who oversees the department’s use of force training — told the jury about the two approved neck restraints: one that renders an actively aggressive suspect unconscious and one that allows the suspect, who is posing “active resistance” to remain conscious while the officer regains control.

Upon being shown a picture of Chauvin kneeling on Floyd, Mercil said Chauvin’s maneuver was not one taught to officers. While Mercil said department policy does not specifically forbid the position used by Floyd, he testified that Chauvin should have stopped kneeling on Floyd once Floyd was in handcuffs.

Lieutenant Johnny Mercil, the Minneapolis Police Department’s coordinator on the use of force, told jurors the neck restraint applied by former police officer Derek Chauvin in the deadly arrest of George Floyd was unauthorized https://t.co/EY996lJFTp pic.twitter.com/JrDCo0dPM2

Before court adjourned for the day, the jury also heard testimony from Los Angeles police Sergeant Jody Stiger, who the prosecution hired to review video footage of last year’s deadly arrest in addition to court records and training policy.

Stiger testified that responding officers were fine to force Floyd out of his SUV and into the back of the police cruiser. According to the sergeant, officers should have lowered or completely stopped using force once Floyd was placed on the ground in a prone position.

Referring to Chauvin kneeling on Floyd’s neck, Stiger told the court, “My opinion is that the force was excessive.”

WATCH: LAPD Sgt. Jody Stiger, a use of force expert, explains his criteria for evaluating force and gives his opinion on Derek Chauvin's actions on May 25, 2020.

"My opinion was that the force was excessive."

Hennepin County’s official autopsy report stated that Floyd’s blood had a fentanyl concentration of 11 nanograms per milliliter. While the medical examiner described the concentration as high and potentially fatal, they stressed that it does not mean Floyd died of an overdose. The report also stated that there was no evidence “to support a diagnosis of traumatic asphyxia or strangulation” in Floyd’s death.

However, an independent autopsy asserted that sustained forceful pressure on Floyd’s neck and back led to his death.