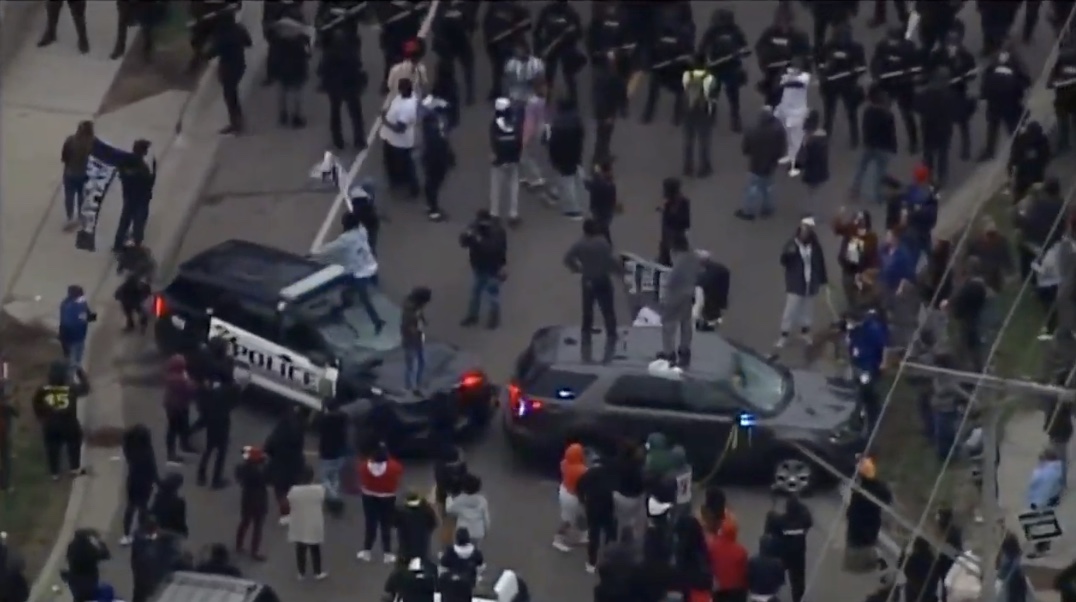 Protesters clashed with police in a Minneapolis suburb Sunday night after a police officer killed a Black motorist who allegedly tried to leave a traffic stop.

Family members identified the dead man as Daunte Wright, 20, according to the Minneapolis Star Tribune, but police have not confirmed his identity.

Brooklyn Center police said that the incident began just before 2 p.m. when they pulled over a driver  for a traffic violation and learned he had an outstanding arrest warrant, Minnesota Public Radio reported. During the arrest, the driver allegedly went to get back into his vehicle, and an officer shot him. The driver drove for “several blocks,” police said, before crashing into another vehicle.

Police said they attempted life-saving measures, but the driver was pronounced dead at the scene, according to KARE11. A female passenger in the vehicle, said to be Wright’s girlfriend, was taken to a hospital to be treated for injuries from the crash.

Wright’s mother, Katie Wright, told the crowd that Daunte called her to say he was being pulled over, the Star Tribune said, and that officers were asking about insurance. She said she heard officers tell him to get out of the car. He asked why, and they said they would explain when he got out. They told him to put the phone down, she said, and she heard someone tell him not to run. An officer disconnected his call, she said, and a short time later, the girlfriend called to say he’d been shot.

The officer shooting in Brooklyn Center today is tragic. We are asking the protesters to continue to be peaceful and that peaceful protesters are not dealt with with force.

As the crowd at the scene grew larger and more agitated, they broke through police tape to confront a line of officers wearing riot gear. Some of the protesters broke patrol vehicle windshields and jumped on their hoods. At one point, police used “non-lethal” projectiles to attempt to disperse the crowd.

WCCO reported that law enforcement was surround the area and attempting to “corral” the protesters.

The incident took place a day before the start of Week 3 of former Minneapolis police officer Derek Chauvin’s murder trial for the death of George Floyd last year.