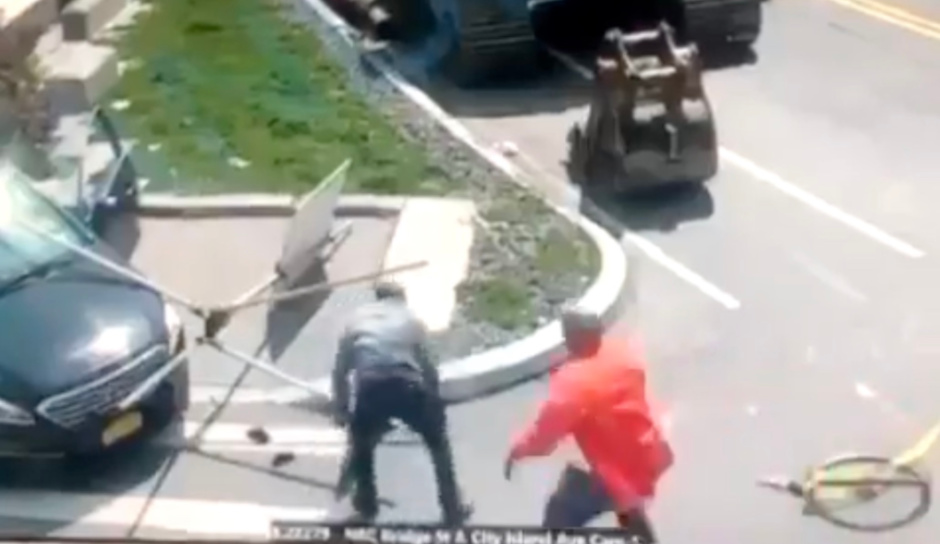 When a beloved construction worker in New York was fatally gunned down this week, her boyfriend chased the shooter and detained him until police could arrive, a dramatic scene that was captured on video, WABC-TV reports.

Investigators say that Jose Everaldo Reyes, 66, a handyman on City Island in the Bronx, would frequently bring sandwiches to Lizbeth Mass, 52, while she was on lunch break at a local construction site.

Reyes did the same on Wednesday, but after talking briefly with Mass, he left.

He then returned with a gun and shot Mass six times.

When Reyes attempted to leave the scene on a bike, Mass’ boyfriend, Dwayne Walker, who happened to be visiting her that day, struck Reyes with his car, causing the shooter to fly off his bicycle and land on the pavement.

Video of the incident shows the vehicle later backs up and strikes Reyes again before Walker begins punching Reyes and pins him down until police arrive.

“The guy lived around the area,” Raul Mass told the Post, “and he was always bringing lunch to her, and my sister is a friendly person to everybody, and he went out to her yesterday, bought her lunch.”

“I think he didn’t know she had a boyfriend,” Raul Mass added.

Walker reportedly warned the woman about Reyes, telling her to “be careful with him” because he was looking at him in a strange manner, Raul told the Post.

EXCLUSIVE VIDEO: A driver hits the suspect accused of shooting and killing 52-year-old Lizbeth Mass at the construction site where she worked on City Island.

Reyes was subsequently arrested and charged with murder, manslaughter, criminal use of a firearm, and criminal possession of a weapon. He allegedly got the gun, a .44 caliber Smith and Wesson, by stealing it from a former NYPD officer for whom he worked.

Residents have turned the construction site into a memorial for Lizbeth Mass, who was known affectionately as the “mayor of City Island.” Part of her job was to hold a sign telling drivers to slow down at the construction site, which she did in an enthusiastic and joyful way.

“We’ve come to know her,” one man told WABC-TV. “She’s here every day, she’s waving flags, she’s very animated, she has a very bubbly personality. Even the people that go for their morning walks have come to know her.”

NYPD Chief of Detectives James Essig said during a news conference that Mass was an innocent victim and that she and Reyes were not in a relationship.

CITY ISLAND SHOOTING: Construction workers who worked alongside Lizbeth Mass remember her a day after she was fatally shot.https://t.co/rgaMFfQQh6 pic.twitter.com/OlPnCDD4Jw

“As we can discern at this time, she is a friendly person,” Essig said, according to WABC-TV.

“We are deeply saddened by the tragic loss of our employee Lizbeth Mass,” the statement reads, according to the television station.

“Liz was a mother, grandmother, sister, daughter, co-worker, and beloved member of the New York construction community. She will be remembered for her kindness and professionalism. The Northeast Remsco family extends our heartfelt condolences to her family and express our deep appreciation for her service to our company and the city of New York.”

Walker is not being charged at this time, but police are still investigating what happened.