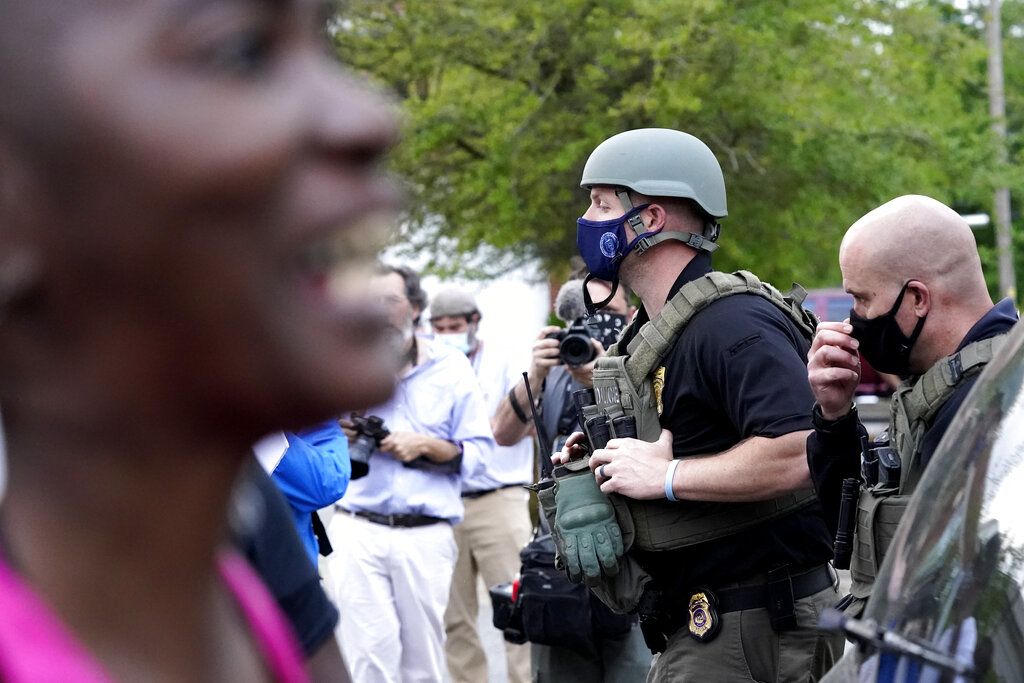 Students at Elizabeth City State University in North Carolina have expressed anger that police officers are now staying in campus housing after students were abruptly displaced from their dorms earlier this week.

CrimeOnline obtained a series of email bulletins sent to the student body of the historically Black college, which is in close proximity to the residential area where Andrew Brown, Jr. was fatally shot by Pasquotank County Sheriff’s deputies on April 21. Late Sunday night, students received an email from ECSU Chancellor Karrie G. Dixon announcing that the school would be transitioning to remote learning in light of ongoing protests in the city, and directing students to evacuate campus housing by noon on Tuesday.

“We ask that students pack up their belongings as if they were not to return to campus for the remainder of the semester,” the letter reads, advising students to leave “as soon as possible.” The letter explains that the decision was made “in anticipation of the City of Elizabeth City declaring a state of emergency on Monday morning.”  The mayor of Elizabeth City did declare a state of emergency Monday.

Students and friends of @ECSU please remember that @ECSU is the property of the state of NC. During times of state of emergency the state has the right to use the facility. That decision is made far beyond the @DrDixonECSU administration. Be fair and keep that in mind.

The letter further states that city and school officials expected the Pasquotank County Sheriff’s Office to publicly release body cam footage of Brown’s fatal shooting. ECSU student Satinika Perrin said in an email that she and other students initially accepted the directive.

“Although we were greatly inconvenienced, it was understood,” Perrin said. But the body cam footage has not yet been released publicly–a judge denied a petition for immediate public release of the footage on Wednesday. And shortly after being directed to leave, ECSU students began to hear rumors that police officers were taking over the vacated campus housing, Perrin said.

On Wednesday, the chancellor confirmed in subsequent announcements that ECSU had “provided previously empty residence hall space to help house officers from other jurisdictions who are assisting local police.” According to the chancellor’s statement, the officers are staying in dorms that were empty prior to the student evacuation.

Perrin said she is skeptical about that claim that officers are staying in housing that was previously empty.

“…I believe [this] is false because all year they were screaming ‘limited housing,'” Perrin said. “So things are not making sense. And we, as the student body, want answers.”

ECSU student Quentin Williams, who is part of the university’s student leadership, said that he was unsuccessful in negotiating with university officials for an exemption from the evacuation directive. Williams said that school administrators are aware that he is housing insecure and has had to put his belongings in storage in the past when campus dorms were closed. CrimeOnline viewed a text message conversation between Williams and someone who Williams said was a housing director.

“You will have to exit the halls by noon tomorrow being that there has been declared a state of emergency in Elizabeth City,” the message sent on Monday reads. “Unfortunately, you will have to take all your items with you because repairs will be made over the break and housing will not be responsible for any items.”

Williams said that he ultimately worked out an agreement to leave his belongings on campus, and went to his sister’s home, a three-hour drive away. But Williams’ sister and her children are all sick with Covid, he said.

“My sister is in quarantine so I can’t really even go in the house,” Williams said. “I’m in between my car and my friends.”

On Thursday, an activist identified as Chelsey Brejanee launched a Change.org petition to address the presence of police officers in ECSU student housing.

“The Elizabeth City community is rightfully responding in protest to the egregious killing of Andrew Brown Jr. and the lack of accountability and transparency that soon followed,” the petition statement reads in part.

“It’s extremely insensitive to support law enforcement in their plight to silence and diminish the community’s efforts and calls for justice … Busing in additional members of law enforcement not only increases tension at the protests, but it also puts Elizabeth City community members at risk for the same unlawful treatment to which protestors in other cities have been subjected …

We are demanding the immediate removal of all law enforcement personnel from the residence halls on the campus of Elizabeth City State University. “

ECSU Chancellor Karrie G. Dixon and Elizabeth City Mayor Bettie Parker did not immediately respond to a request for comment.

Students and friends of @ECSU please remember that @ECSU is the property of the state of NC. During times of state of emergency the state has the right to use the facility. That decision is made far beyond the @DrDixonECSU administration. Be fair and keep that in mind.