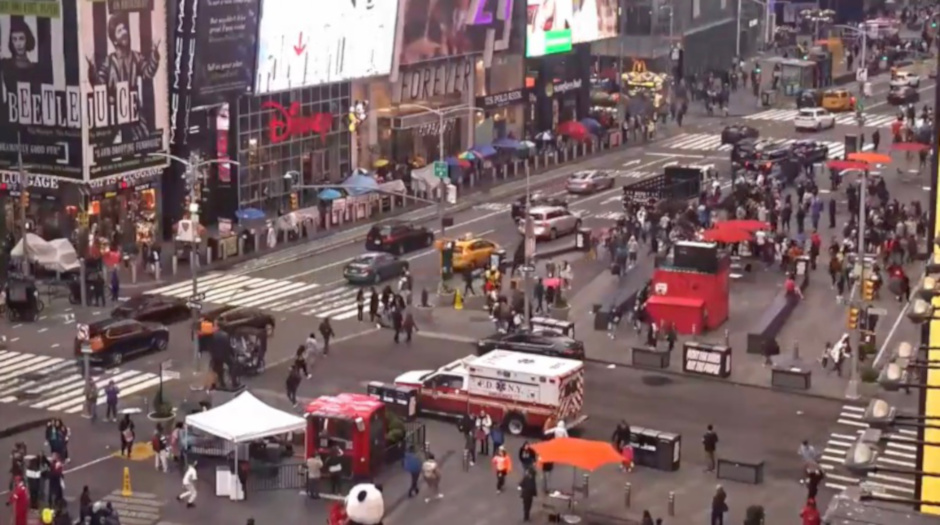 Two women and a 4-year-old girl shot and wounded late Saturday afternoon in New York’s Times Square were innocent bystanders caught in gunfire that erupted out of an argument.

New York Police Commissioner Dermot Shea said the shooting happened just before 5 p.m. when two to four men were arguing near the corner of W 44th Street and 7th Avenue. One of them pulled out a gun and fired wildly, striking the three bystanders.

“It appears that the three individuals who were shot were not known to each other,” the commissioner said, “and it appears they were innocent bystanders.”

.@NYPDShea shares details of the shooting in Times Square tonight that left 3 people injured, including a 4-year-old. pic.twitter.com/5iKkZXZGRW

Shea said the girl, who was struck in the leg, was shopping for toys with her family from Brooklyn. She is expected to undergo surgery shortly, he said.

The other two victims were a 23-year-old woman visiting the city from Rhode Island, who was also struck in the leg, and a 43-year-old woman from New Jersey, who was shot in the foot. None of the injuries were life threatening.

Shea said police have released images of a man they believe fired the shots and are tracking his movements after the shooting. Detectives recovered three 25 mm shell casings from the scene.

WANTED in connection to shooting three people near West 44th Street and 7th Avenue in Manhattan on May 8, 2021. @NYPDDetectives need anyone with information about the identity or whereabouts of this individual to contact @NYPDTips at #800577TIPS. All calls are anonymous. pic.twitter.com/qciBGCR6AK

Shea said police in the area responded immediately and made sure the victims received assistance. He was frustrated, however,

“When is this going to end? How many people have to be injured before we take this seriously?” he said.

Video from the scene showed people running, including a security video that appeared to include the sound of three gunshots:

#TimesSquare video from the shooting in Times Square: tourists run for their lives after 3 shots ring out. pic.twitter.com/6Oxb7GwpbX

Sandy Espinoza, a 42-year-old visitor from Illinois, said she was standing two blocks away at W 46th St when the gunfire began.

“I heard three loud shots,” she told the New York Daily News. “Everybody was running,” Espinoza said. “People were panicking and screaming. It was like a stampede of people. We were worrying we were going to get run over by people. We ran with everyone else.”

Street vendor Khadim Sakho, 25, told the Post he heard two shots and saw the toddler with a lot of blood.

“The cops grabbed the baby and put him in the ambulance,” Khadim said.

Ciro Iova, who said he was at a nearby McDonald’s, reported hearing three shots and saw the woman, who appeared to be in her 20s, on the ground.

“She was crying out for assistance,” he said.

[Featured image: The scene at Times Square after the shooting/Fire Department of New York]