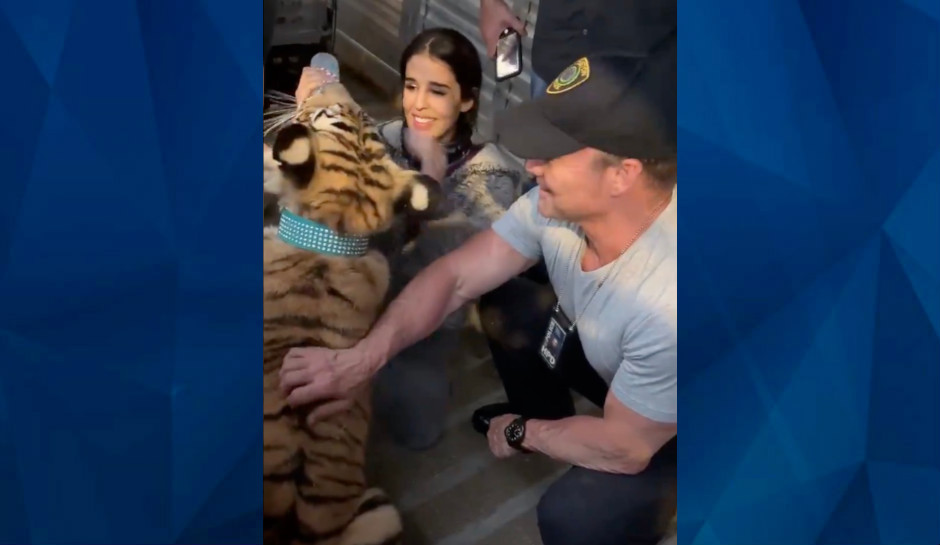 A Bengal tiger missing since his murder-suspect owner fled from Houston police with him last week has been located and is safely headed for a wildlife shelter in north Texas.

Victor Cuevas, 26, was out on bail from a 2017 murder charge on May 10 when the 9-month-old tiger apparently got out of his west Houston home. Several neighbors called 911 and posted on a neighborhood group, which brought off-duty Waller County Deputy Wes Manion to the scene, as CrimeOnline previously reported.

Manion faced the big cat down with his gun drawn until Cuevas came out and retrieved the animal. And before Houston police could arrive — it’s illegal to own an exotic animal of that size in Houston — Cuevas loaded India into his SUV and left.

Cuevas was located and arrested later that day, but India was nowhere to be seen. Cuevas’s bond was revoked on Friday while police continued their hunt for the tiger.

Houston police announced Saturday night they’d retrieved the tiger after a friend of the Cuevases phoned with a tip about the cat’s location. KHOU reported that Linda McIngvale, wife of well-known Houston businessman Jim “Mattress Mack” McIngvale, facilitated the transfer to the city of Houston’s BARC Animal Shelter, which in turn sent India to the Cleveland Amory Black Beauty Ranch in Murchison, Texas.

Cuevas’s attorney Mike Elliot has repeatedly said that India does not belong to Cuevas, although he spends considerable time with the tiger. Houston police Commander Ron Borza, however, said that Cuevas’s wife Gia said India did belong to the couple.

Borza said police brought Gia Cuevas along with them for the tiger’s transfer, helping make it successful.