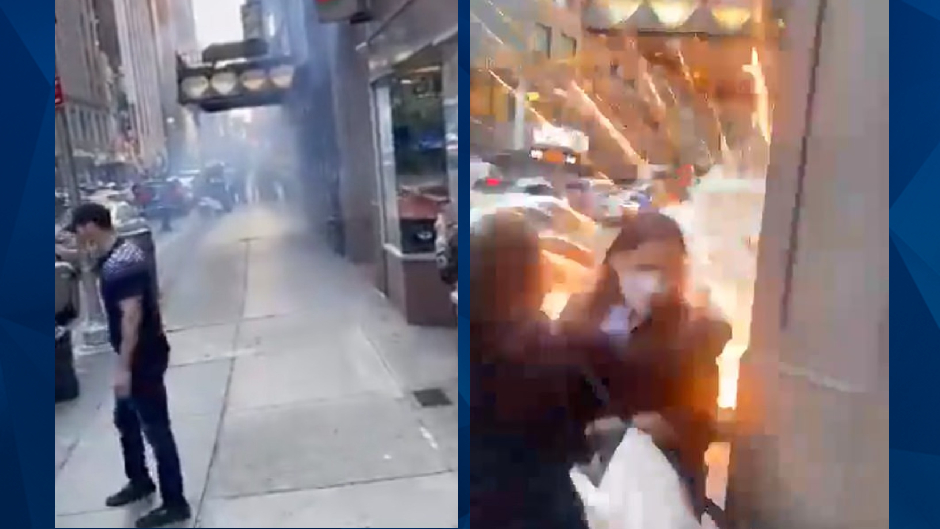 At least 26 people were arrested on Thursday amid violent clashes between pro-Israel and pro-Palestine protesters, according to reports.

NYPD officials told WABC that two commercial fireworks were thrown from a car during the protests which occurred at Times Square. CBS News reported that the incident unfolded in New York City’s Diamond District, an area that has ties with the Jewish community.

The New York Post reported that a 55-year-old woman suffered burns to her lower back. WPIX reported that the firework blasts also sent two police officers to the hospital.

Speaking with the Post, a source said the bomb squad responded to the fireworks and a device they described as a “60-second smoke generator.” Sources also told the news outlet that he fireworks were hurled from a truck was among a group of vehicles that were waving Palestinian flags.

JUST IN – Explosive device was thrown at a crowd in NYC’s Diamond District amid Pro-Palestine and Pro-Israel protests.pic.twitter.com/PT5peG3Q58

Police said 17 of the 26 people arrested received summonses, eight were processed, and a juvenile received a write-up, according to WPIX.

The Daily Mail reported that before the blasts, protestors set an Israeli flag on fire as some threw projectiles at one another. Demonstrators hurled projectiles and knocked over planters as police tried to separate feuding protestors.

Police have not determined who threw the fireworks during Thursday’s protest.

Meanwhile, the NYPD Hate Crimes Task Force confirmed they have opened an investigation into an assault of a Jewish man that occurred near Thursday’s protests. According to WCBS, a group of six people kicked the 29-year-old victim, struck him with crutches, and pepper sprayed him. Police said the assailants also used anti-Jewish slurs during the attack.