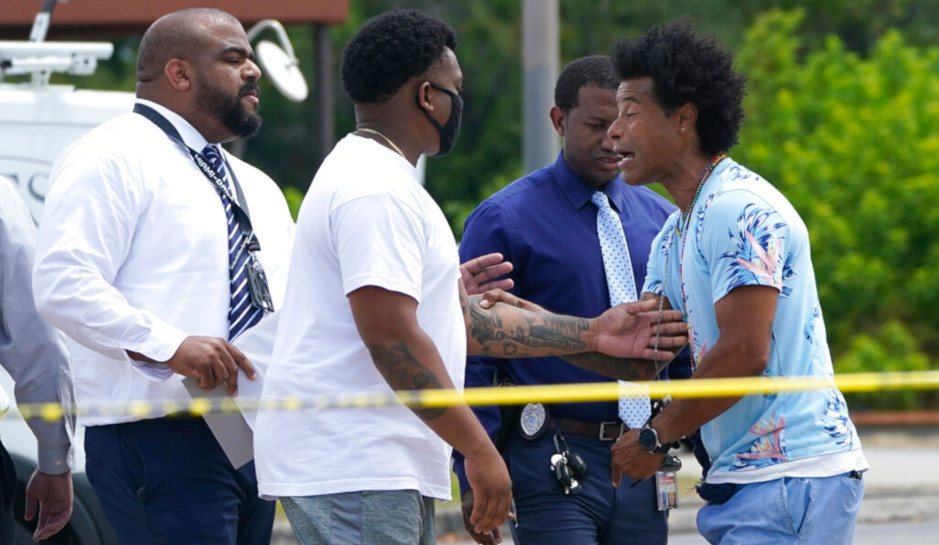 A shooting at a Miami banquet hall early Sunday following a rapper’s album release party turned into a chaotic shootout between the initial attackers and patrons who returned fire, leaving two people dead and at least 20 more wounded.

Three gunmen wearing ski masks and hoodies waited in a Nissan Pathfinder outside the El Mula Banquet Hall for 40 minutes, a senior law enforcement official told CBS4 Miami, apparently waiting for the concert to end. When it did, and patrons began filing out of the hall, the three shooters got out of their vehicle and fired indiscriminately into the crowd with semi-automatic rifles and handguns.

Investigators found dozens of shell casings at the scene, and several cars were left behind by patrons had bullet holes.

“Well, we know now from the evidence that’s coming out is that there was return fire from the patrons when when these subjects began firing,” Miami-Dade Police Department Director Freddy Ramirez told Local 10. “There was returned fire. There’s multiple casings throughout the scene that establishes that; however, we don’t know at this time who were the shooters that were returning fire.”

Police also don’t know who the masked shooters were and are trying to track them — and their vehicle — down.

Miami-Dade police spokesman Detective Angel Rodriguez. said that paramedics took eight victims from the scene while at least 12 more arrived in private vehicles. The two people killed were pronounced dead at the scene; three people are hospitalized in critical condition.

Ramirez said the shooting was “definitely not random,” although he couldn’t say who the target or targets were.

“This type of gun violence has to stop,” Ramirez said. “Every weekend it is the same thing. This is targeted.”

Ramirez touted a $100,000 reward offered for information leading to an arrest by a local businessman. Later, he said that the Miami field division of the Bureau of Alcohol, Tobacco, Firearms, and Explosives had added another $25,000 to the reward.

Grateful for this contribution @marcuslemonis! This is our community, we are stronger together. We need our county to step up with information. If you know something, you can remain anonymous by calling @CrimeStopper305. https://t.co/hkxv6sNhjg

The victims have not been identified, but family members have begun to identify some of them.

Chad Harris, the father of a 19-year-old woman who was shot, told Local 10 that his daughter was undergoing surgery.

Clayton Dillard told WESH that his son, Clayton Dillard III, was among the dead. “I know he’s there,” Dillard said, “but they won’t let me come claim him.”

Police told the sobbing father they couldn’t do that until they’d collected all the evidence from the scene, but it didn’t help his grief as he waited, his son’s body under a tarp in 90 degree heat for 18 hours, Local 10 reported.

[Featured image: Clayton Dillard seeks information about a family member from police after a shooting outside a Miami banquet hall. (AP Photo/Lynne Sladky)]