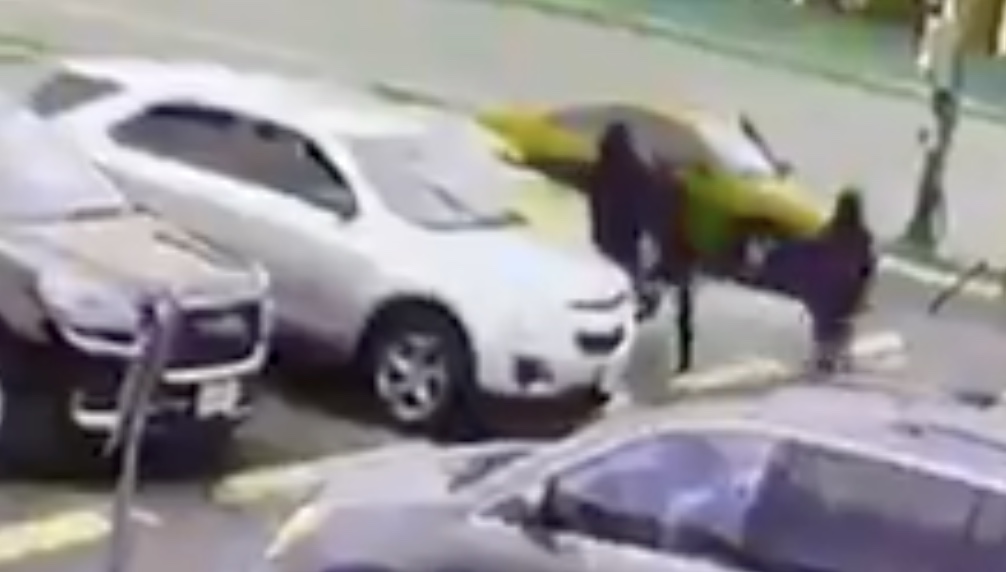 SEE IT: Mom of 2 shot 7 times as she parks her car

Police say Jessica Marzett was an ‘innocent victim’ in the vicious shooting by 3 men who appeared to have followed her into the parking lot.

A 34-year-old Ohio mother of two parking her vehicle at a strip mall Thursday was shot seven times as 23 rounds were fired into her SUV by three men who jumped out of another car and then sped away when they were done.

Jessica Marzett was rushed to a nearby hospital in critical condition, WSYX reported. Family members said she was hit twice in the chest and five times in the arm and is expected to survive.

The Columbus Division of Police said Marzett was “an innocent victim” in the shooting, which lasted only 10 seconds.

Surveillance video from Fisher Fish and Chicken shows Marzett pulls into the parking lot from behind the establishment, pulling her white SUV into a parking space in front. A red car swings around, apparently following Marzett, and comes to a stop beside another parking space and the three men jump out and run to Marzett’s vehicle, firing their weapons. They run back to their car, back away and speed off on East Livingston Avenue.

Police released still images of the red car and asked anyone with information to call.

Munjed Hinnawi, the owner of Fisher Fish and Chicken, said everyone in the restaurant heard the gunshots. “We had customers on the floor,” he told WSYX. “I’m surprised when I see three people, 23 shots. I can’t believe it.”

Hinnawi’s employee ran out of the building to check on Marzett as the shooters sped away, he said.

“He saw the lady,” Hinnawi said. “He checked on the lady. He said he did not sleep all night.”

“Some are small businesses and they can’t afford to have security at $30-$40 an hour,” commission chair Quay Barnes said. “Bringing them together, we could probably get the civilian crime patrol to walk up and down the street as we have on Main Street. They may be able to afford off-duty officers.”

She said the commission is also working with the city attorney’s office to deal with “problem properties” and is looking for ways to get kids in the area more involved as school ends for the summer.