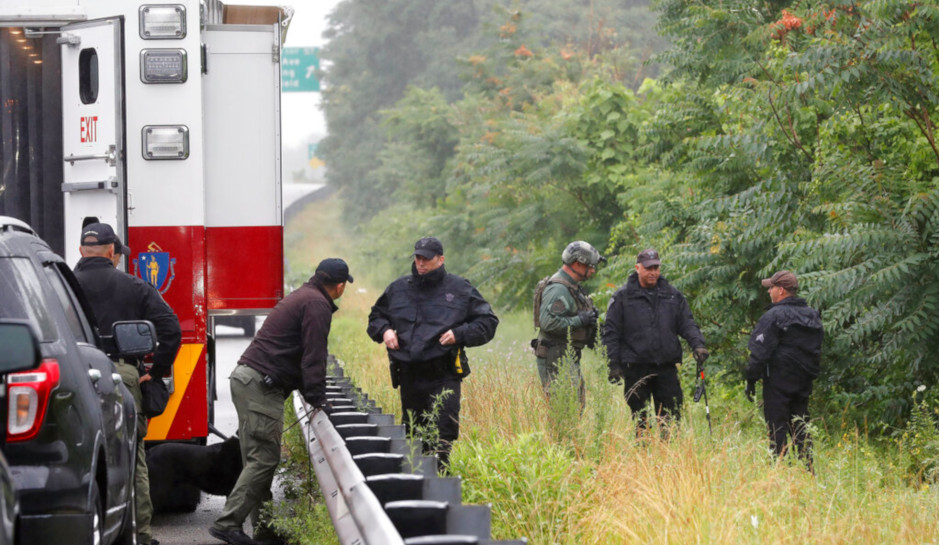 Eleven heavily armed “sovereign citizens” on their way to a training exercise in Maine were arrested Saturday morning in the Boston suburb of Wakefield after their presence triggered a shelter-in-place order and a shutdown of the highway.

By late morning, Massachusetts State Police had lifted the shelter-in-place order and reopened the interstate.

MSP Superintendent Col. Christopher Mason said the men, traveling in two vehicles, had stopped in the breakdown lane of Interstate 95 at about 1:30 a.m. to refuel when a state trooper stopped to provide assistance. The trooper found men wearing military- styled clothing with tactical gear, rifles, and handguns, WCVB reported.

When he asked why they were dressed as they were, they told him they were traveling from Rhode Island to Maine for “training.” The trooper asked for identification and firearm licenses, Mason said, and called for backup when the men said they didn’t have documentation available. The men reportedly told police they were members of “Moorish American Arms” and that they do “not recognize our laws,” as CrimeOnline previously reported.

“At some point during this interaction, a number of those individuals alight into the woodline with their firearms. A perimeter was quickly established,” Mason said.

Shortly after 6 a.m., two men were taken into custody on North Avenue, near the law enforcement staging area, WCVB reported. Mason later said one of those two men was armed but the other was not.

Massachusetts State Police spokesman David Procopio said at about 10:30 a.m. that seven men had been taken into custody, along with two more who were found in the group’s vehicles about 40 minutes later. Two of the eleven men were taken to a hospital for treatment of pre-existing conditions.

Mason said the leader of the group made it clear to negotiators during the course of the stand-off that the group is not anti-government and “wanted a voice” and “wanted to be heard.”

No shots were fired during the stand-off, and Mason credit the use of armored personnel carriers for resolving the situation.

“We were able to utilize, to great effect, the BearCats. They demonstrated and sent a message that we were serious, that we were resolved about getting this issue ended and ending it in a safe way. The BearCats allow us to do that,” he said. “Once those BearCats pressed the scene and moved them in, it had its desired effect and they were compliant very quickly.”

Mason said that police swept the vehicles and the woods for explosives out of precaution; the group tendered no threats.

Several videos allegedly showing parts of the stand-off were posted to an Instagram account for Moorish American Arms. Two livestreams were posted to a YouTube channel for Rise of the Moors as well, but those videos have been removed. In one of the livestreams, the man speaking said that he had told law enforcement the group was not “sovereign citizens,” “Black identity extremists,” “anti-police,” or “anti-government.”

“I reassured that these men here would not be pointing guns at them,” he said, according to Patch.com, adding that their vehicles contained camping equipment and that they stopped to refuel with gasoline they carried with them to avoid stopping at gas stations.

The man, who also said he was recording all of the incident with a body cam, said their vehicles were full of camping equipment and they had no plans to stop in the state but needed to in order to fill their vehicles with fuel. He cited federal law and court cases that he believed allowed them to travel, armed, through Massachusetts, without being detained.

The Middlesex District Attorney’s Office and state investigators are working to determine what charges the suspects will face, District Attorney Marian Ryan said. She also said that her office is working to identify all 11 men and that they will likely be arraigned Tuesday morning in Woburn District Court.

Middlesex District Attorney Marian Ryan and Mason both said that Ryan’s office and state police investigators are working to determine the exact charges that the suspects involved in the standoff will face.

Ryan says her office working to identify the men in custody and that they will likely be arraigned Tuesday morning in Woburn District Court.

Mason said that state and local authorities received assistance from the Northeastern Massachusetts Law Enforcement Council (NEMLEC) and the Massachusetts Department of Transportation, the latter of which provided dump trucks and snowplows to help set up a blockade on Interstate 95.

The Southern Poverty Law Center describes the Moorish group as a “collection of independent organizations and lone individuals” that “espouse an interpretation of sovereign doctrine that African Americans constitute an elite class within American society with special rights and privileges that convey on them a sovereign immunity placing them beyond federal and state authority.”

[Featured image: Police work in the area of an hours long standoff with a group of armed men that partially shut down Interstate 95, July 3, 2021, in Wakefield, Massachusetts. (AP Photo/Michael Dwyer)]