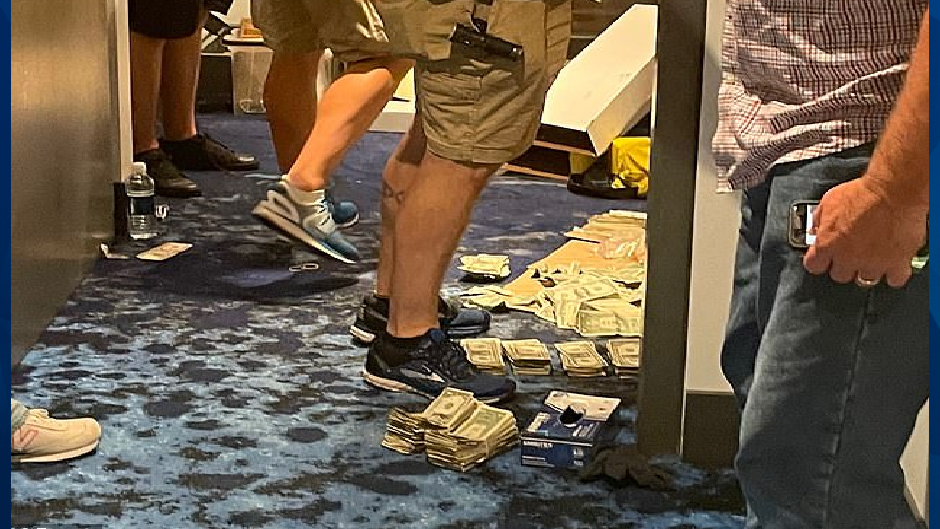 SEE IT: Jailed suspect in so-called shooting plot in Denver says there was a ‘giant misunderstanding’ and no mass violence was planned [VIDEO]

A man who was arrested on Friday in Colorado with three other people is speaking out about the stockpile of weapons, money and drugs that were reportedly found in their hotel room.

Denver police arrested Richard Platt, 42, Gabriel Rodriguez, 48, Ricardo Rodriguez, 44, and Kanoelehua Serikawa, 43, at Maven Hotel after a housekeeper reportedly discovered dozens of weapons and hundreds of ammunition in an eighth-floor room.  Sources told KMGH officials originally feared the weapons were going to be used to stage a “Las Vegas-style shooting.”

While the arrests occurred in the proximity of Coors Field, where the 2021 MLB All-Star game took place, the FBI said in a tweet that they do not believe the case is linked to terrorism or the event was the intended target of any crime.

Meanwhile, Ricardo Rodriguez told KCNC that he arrived in Denver from Washington and that he had no involvement in the drugs, weapons, and cash found in the hotel rooms. He claimed he asked Platt about the guns after seeing them, and Platt allegedly said he was collecting them for friends and trading them.

Ricardo Rodriguez also told the news outlet that he had no knowledge of the weapons being used for mass violence, and that the reports about a planned mass shooting were “a giant misunderstanding.”

CPR News reported that the criminal charges filed against the suspects are as follows:

Denver police confirmed to the news outlet that two cars were impounded as part of their ongoing investigation. However, court documents detailed that two hotel rooms connected to the investigations contained “numerous different kinds of drugs that are alleged to have been in the two different (hotel) rooms including Ecstasy, heroin, and methamphetamines” in addition to “a large amount of cash that’s found in the rooms and/or on the persons of the people that are part of the co-defendant network,” according to KDVR.

Platt, who has a lengthy criminal history that includes arrests for weapon- and drug-related charges in addition to theft and child abuse charges, remains jailed on a $50,000 bond.