Manhunt for Gabby Petito’s boyfriend continues with no sign of him since September 14.

Brian Laundrie’s attorney commented on a warrant for his arrest on bank fraud charges hours after the FBI announced the charges.

Steven Bertolino said in a statement that he understands the warrant “is related to activities occurring after the death of Gabby Petito and not related to her demise,” WPTV reported.

“The FBI is focusing on locating Brian and when that occurs the specifics of the charges covered under the indictment will be addressed in the proper forum,” he said.

The Laundries’ attorney, Steven Bertolino of New York, issued a statement that said he had no comment about the indictment, WPTV reported.

The warrant was issued Thursday after a grand jury indicted Laundrie for using “unauthorized access devices” — a debit card and a PIN number — to take more than $1,000 from two Capitol One bank accounts “following the death of Gabby Petito.” The indictment says the accounts were accessed between August 30 and September 1.

Laundrie hasn’t been seen since September 14 when he fled his parents house in North Point, Florida. He had been traveling out west with Petito since July 2, but he returned on September 1 without her and did not inform her family, as CrimeOnline previously reported.

Petito’s family reported her missing on September 11 when they learned Laundrie and the van the couple had been traveling in were back in Florida, where they lived at his parents’ home. His parents refused to speak with police or allow them to speak with Laundrie until September 17, when they called police to their home to report him missing. 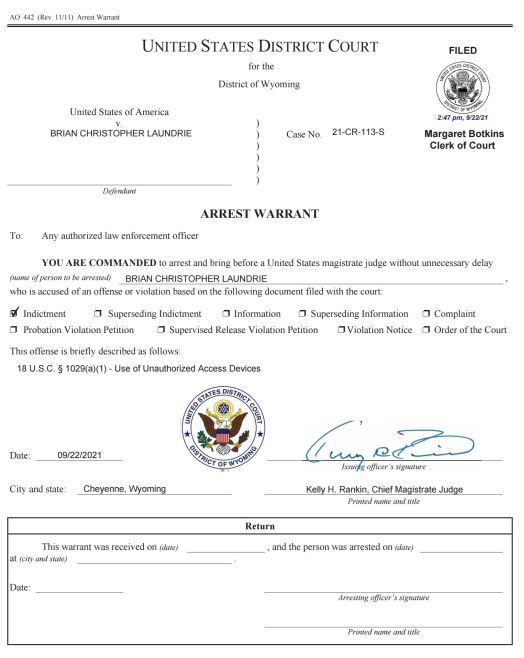 Bertolino also told reporters that Christopher and Roberta Laundrie’s unexplained trip to Orlando on Thursday was to meet with him.

While Brian Laundrie has not been named a suspect in Petito’s murder, he has been named a person of interest.

The FBI’s Denver office, which sought the indictment in the US District Court of Wyoming, said in a tweet that the investigation into the murder was ongoing.

Petito’s body was found Sunday in a remote camping area of Bridger-Teton National Forest, adjacent to Grand Teton National Park, where she was last known to be. An autopsy on Tuesday positively identified Petito’s body and determined the manner of death of homicide. The cause of death is still pending.

Authorities have been following tips on Laundrie’s location but have focused their search on the 25,000 acre Carlton Reserve, where his parents said he told them he was going when he left their home on Tuesday.

Anyone with information on Laundrie’s whereabouts should contact the FBI at tips.fbi.gov, or call 1-800-CALL-FBI, or 303-629-7171. Upload photos and videos to fbi.gov/petito.

The FBI specifically asked that anyone in the Spread Creek Dispersed Camping Area between August 27 and August 30 who may have seen Gabby Petito or Brian Laundrie or their van to contact authorities.

Check back for updates. This is a developing story.